In the words of style icon Patricia Field, “if you don’t have an exciting life in New York, it’s your fault.” With her fiery red hair and distinctively eclectic taste in garments and glitz, the 74-year-old designer, famous for her work on Sex and the City, The Devil Wears Prada, and Ugly Betty, has been called a legend among New York’s fashion-forward. Oozing with glitter, sequins, spandex, neon, and tutus, her eponymous boutique at 306 Bowery is a downtown landmark — and it’s scheduled to close this coming spring, on the fiftieth anniversary of Field’s opening her first store.

Former employee JoJo Americo remembers how friends and colleagues used to call Field the Andy Warhol of downtown fashion for the way she provided a creative outlet for street kids, club kids, artists, socialites, and pop icons, from Debbie Harry to Madonna to Missy Elliott. “When you’re an artist, you count on a distinct look. I counted on Patricia Field to stylize me, keep me fresh, and get my career going,” says client Don Patron, a portrait artist for government officials, whom Field once bedazzled in sequins for a black-tie charity event in D.C. (“They’ll think I’m Liza Minnelli,” he originally thought.)

“If Pat Field isn’t there to put her finger on the pulse,” Patron continues, “then New York has one less place for creative youth to express themselves within the city boundaries. She is a defining voice in New York City culture.”

In 1966, after studying at NYU, the 24-year-old Field opened her first store near campus. “That was the little store that started it all,” she tells the Voice. She grew up in Queens in a Greek-Armenian family of entrepreneurs. “Fashion always came easy to me,” she says, “and I’m entrepreneurial. I didn’t want to work for a company; I wanted to work for myself — that’s why I did it.” She moved the boutique to a larger location on 8th Street in 1971 (to be frequented by Destiny’s Child–era Beyoncé and her mom, designer Tina Knowles) and eventually to her current spot on the Bowery.

In the beginning the era was mod, Field says, and then trends turned toward the hippie. “The hippie I had a little bit more of an aesthetic problem with because I like clean lines,” she says. “I’m not a grungy one, but, you know, the Eighties were great fun.” And by the late Seventies and Eighties, Field’s business came into its prime.

“That’s when people went out and danced. You know, you go out, you get dressed,” she says, reminiscing about her favorite old clubs — Studio 54, Paradise Garage, and Area were Field’s top three. “At Studio 54, they wouldn’t let you in the door unless you looked fabulous…. The mood was high. It was fashion and music and art. People like Keith Haring or Andy Warhol would be at Studio 54 or Paradise Garage. It was another time, another way of enjoying people, of people enjoying themselves. It included fashion because people were going out being so-called fabulous.” Field adds that things have changed, and that today it “only matters if you have enough money for a bottle of Champagne” at the club. 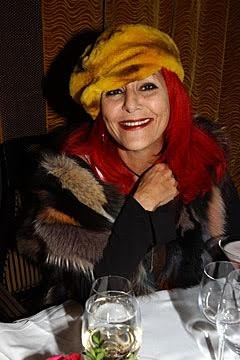 Field was among the first to hire drag queens, people from the clubs and from “the scene,” recalls Americo. In the Eighties, she started “House of Field” and became a member of the ballroom community. The balls, which had originally been popular in community centers in Harlem, Brooklyn, and the Bronx, became glamorous discos, beckoning the most eccentric and most extravagant of New York’s who’s-who to participate in fashion, body, face, and dance competitions.

“It was a gay event, basically, and I picked up on it,” says Field. “I remember a ball on Grand Street on the East Side. We rented this ballroom there, and I invited all the fashion people, designers, and so on to come and to judge. And so I basically introduced this whole idea to the fashion world and many people.” Among them was Madonna, who frequented Field’s boutique and voguing balls; she released “Vogue” in 1990.

As the Eighties whizzed into the Nineties, style became more sporty, inspired by surfing and athletic gear. “I remember Larry Levan, the major DJ at Paradise Garage, used to come in every week and get himself an outfit for the weekend,” says Field. She remembers that he favored printed pants made by the company Life’s a Beach.

Field claims to have inducted the body glove into fashion, as well, when it had initially been used only for windsurfing. “I was like, ‘This is great club wear,’ ” she says. “Dance music was prevalent, and I think club clothes became, let’s say, a consciousness: club wear.” Her boutique became a club kid favorite; it even attracted the undercover DEA agents who would “party” at major Ecstasy dens like Limelight and Tunnel before they were eventually shut down, as detailed by Lisa Sweetingham in the book Chemical Cowboys.

Dog collars, fishnets, and latex filled the dance floors. “We have the creative customer, so to speak,” says Field. “A clique of people grew around the store; they would come and hang out. I kind of called it a clubhouse.” Because the atmosphere was so fun and everyone knew each other, she says, people used to refer to the boutique as a kind of daytime club.

[pullquote]’If I have any sorrow about selling my property and closing my store, it’s that I love being on my floor and my clients come in and tell me how happy they are.'[/pullquote]

Kids who hung out even at small venues like Club 57 and the Boy Bar on St. Marks would spend the daylight hours shopping at Patricia Field. “It had that sort of very home, family attitude,” she says. “If I have any sorrow about selling my property and closing my store, it’s that I love being on my floor and my clients come in and tell me how happy they are. I can’t tell you the value of hearing those words.”

Field, who now consults on the TV Land series Younger, starring Sutton Foster and Hilary Duff, has been working nonstop. Swamped and exhausted, she says that selling her property is a personal decision, meant to open up more time for new creative endeavors, swimming, and seeing friends. “The quality of my life is very important,” says Field, whose life the past couple of years has consisted only of “work and sleep.”

The Patricia Field boutique is one of New York’s last standing relics of a bygone era, soon to be remembered among specialty shops like the Mask, a latex store on Orchard (“fashion latex, not bondage latex,” Field clarifies), now long gone. “They’re gone, and I’m sorry they’re gone because they were kind of like our relatives,” Field says. “I basically always stayed away from trends. I see my store as a fashion bazaar. It’s been more important as the years went on, with the advent of all this chain store volume, to be individual, to stake out your brand image.”

“Pat gave people full reign to do whatever they wanted, to express themselves,” says Americo. “She gave people freedom that you would never have gotten from anyone. There will never be anything like it.”