Your Crap Archivist brings you the finest in forgotten and bewildering crap culled from basements, thrift stores, estate sales, and flea markets. 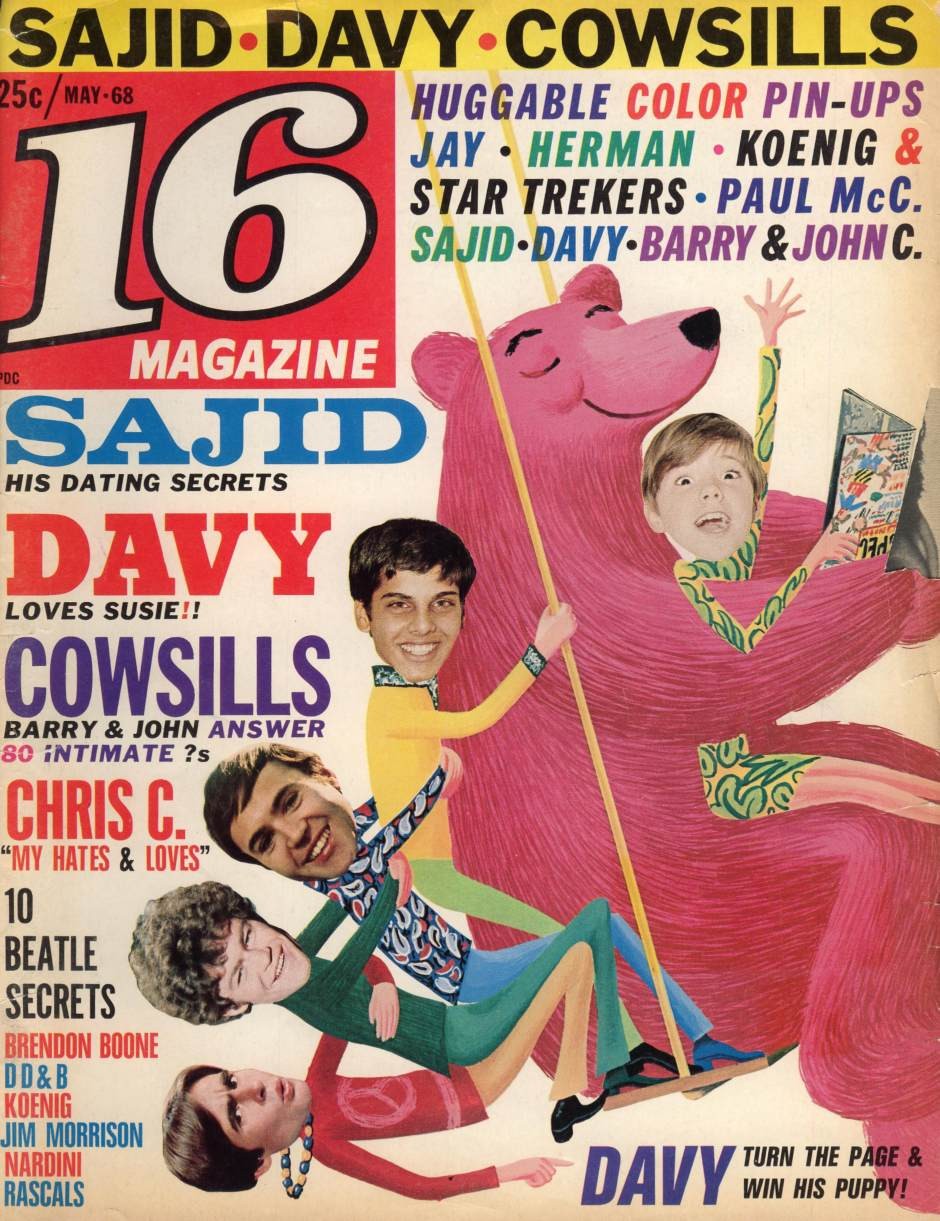 Date: May 1968
The Cover Promises: That “Davy” is enough to tip off any reasonable person that you mean Davy Jones

That means you’ve sipped Cokes with the Cowsills and Pepsis with Peter Noone! You hated watching those Beatles grow aloof, but in a Monkee profile you were privileged to write, “You have ascended from Monkee-land to Monkee-heaven. After all, it isn’t every day that a girl has two of the world’s top teen idols quarreling over which one she will lunch with!”

You understand that second-person address allows you to make readers feel as special as you do!

But what in your experience can prepare you for this next assignment, “My Dream Day With Jim Morrison”? 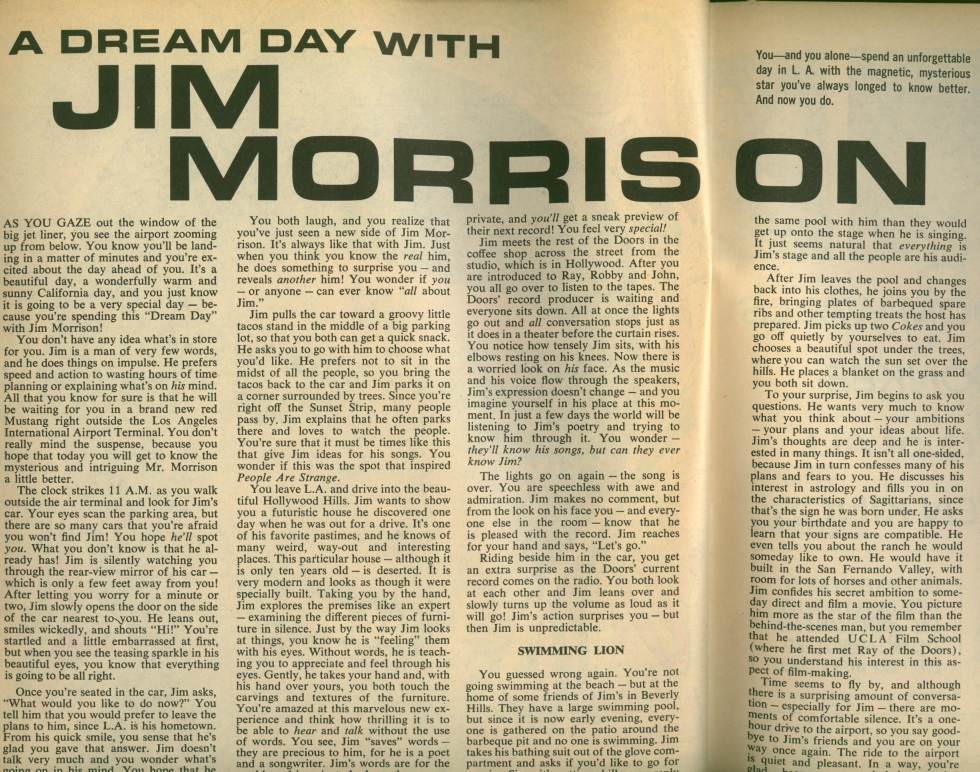 After meeting you at LAX in his red Mustang, the Doors dreamboat spirits you to a “groovy little tacos stand” off the Sunset Strip and then off to the Hollywood Hills to look at furniture, where things get spiritual:

Gently, he takes your hand and, with his hand over yours, you both touch the carvings and texture of the furniture. You’re amazed at this marvelous new experience and think how thrilling it is to be able to hear and talk without the use of words.

After that, it’s barbecue, poolside, in Hollywood. Morrison strips down and treats you to his “super swimming style.” What happens next transcends even Monkee-heaven.

He lifts himself upon the edge of the pool and shakes his head — looking like a great, damp young lion.

Still shaken, you watch the sunset on a blanket and discuss the compatibility of your star signs. He doesn’t talk much, and you enjoy many “comfortable silences.” He takes you to a recording session, and you know the song’s a hit, and you wonder of the world, “They’ll know his songs, but can they ever know Jim?”

Sadly, you soon must part from this poet/lion/mental-feeler-of-furniture. After your return you to the terrestrial sphere, you take what you’ve discovered, and you share of it what you can.

You write this conclusion. 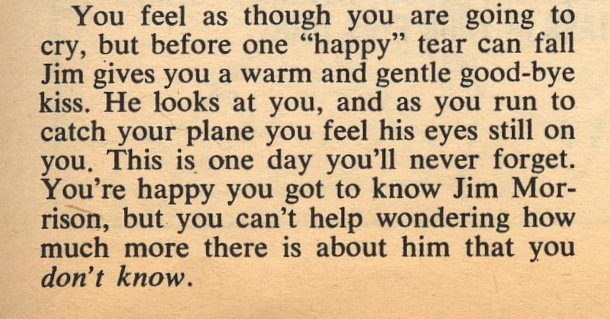 There’s a couple key disquieting facts you’ve almost certainly noticed about Jim Morrison on your day together, facts that might help the world to know Jim. But even if you divulged them, would the world truly understand? You opt not to mention them, but that’s OK. Nobody will ever know.

Fortunately for the writers at 16, by 1968 unruly teen idols were the exception. Unlike Morrison, the Monkees were knowable. 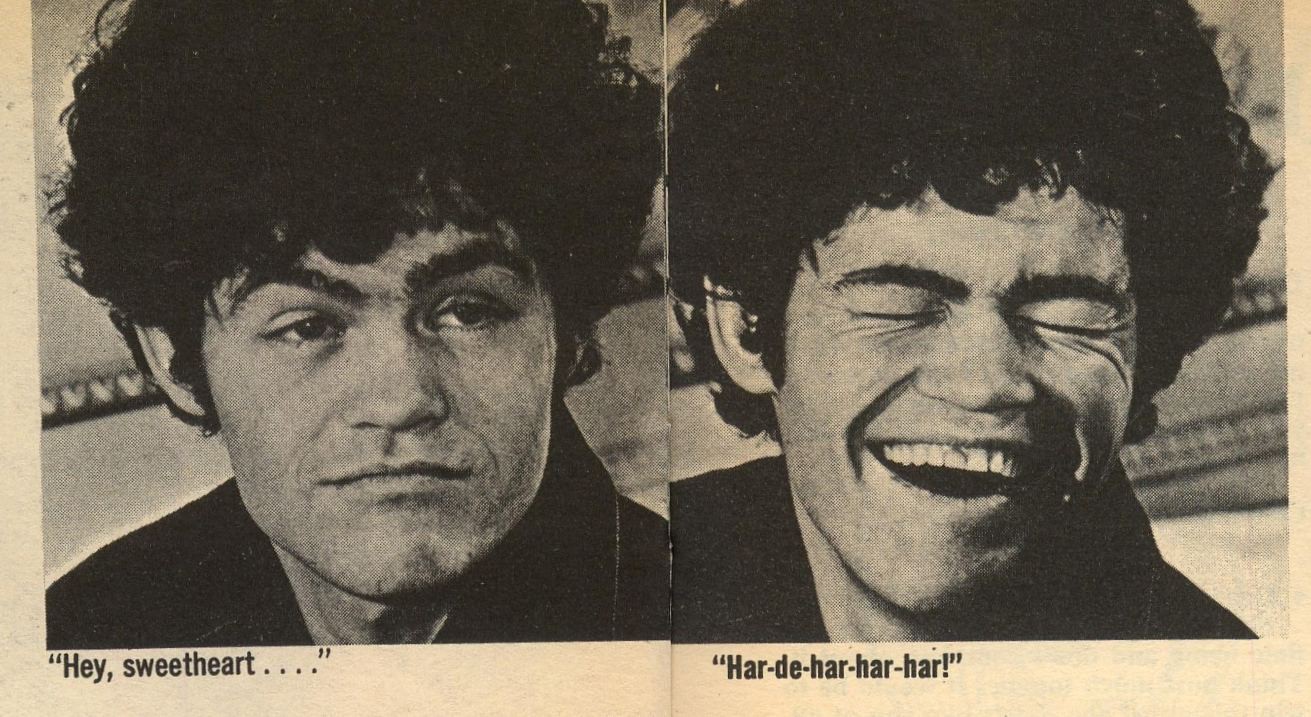 And they took letters. 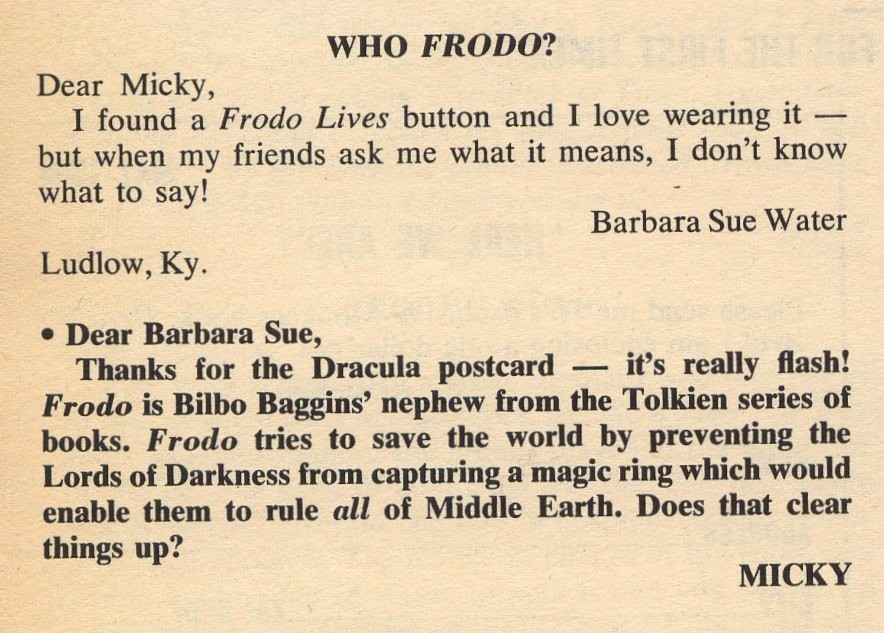 And the “one and only, delightfully delicious Davy Jones” wants to give you a puppy. 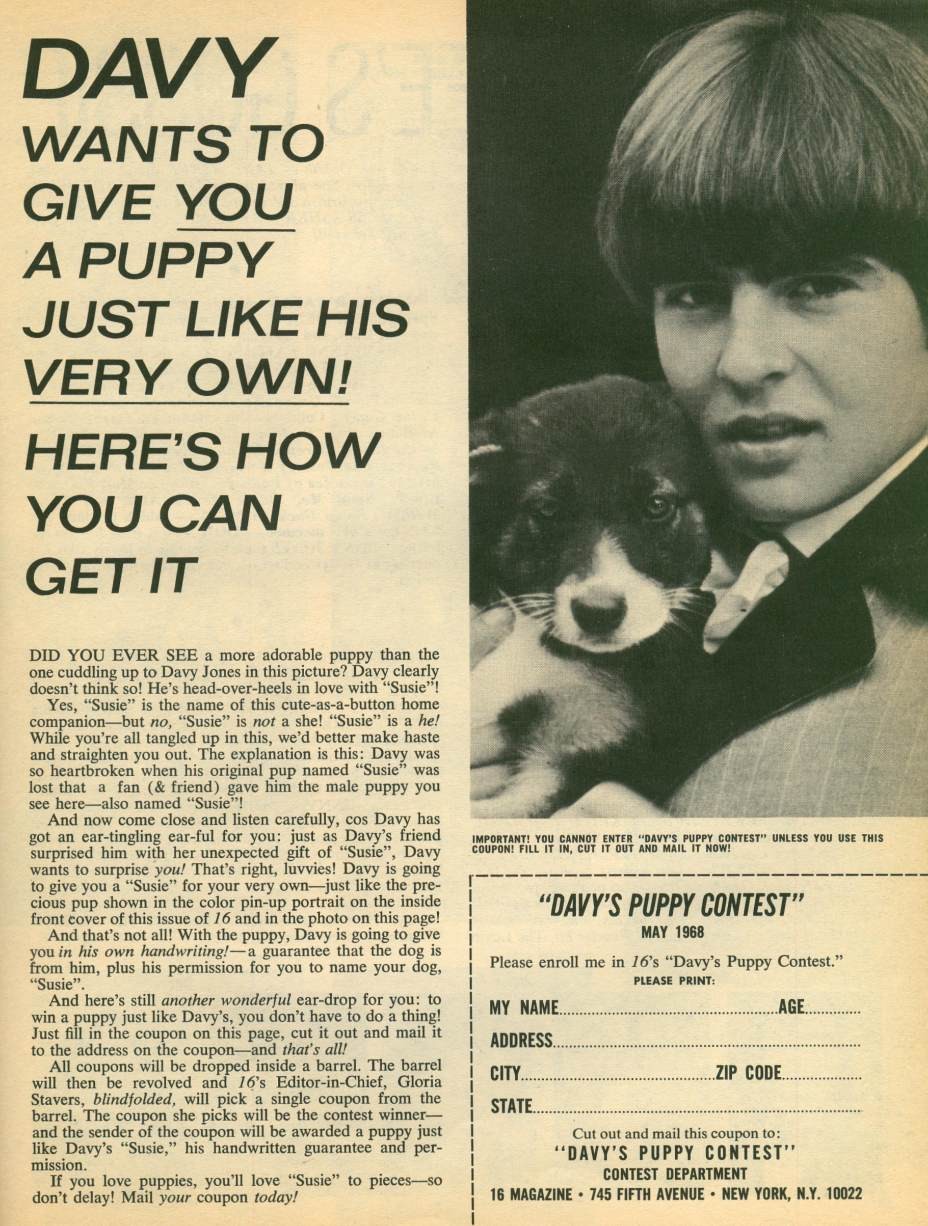 Mostly, 16 sticks to housebroken stars like Sonny & Cher, who for reasons of hilarity are invited to share their wisdom in an advice column. 16 splits the page into separate “Dear Sonny” and “Dear Cher” sections. Can you guess which star got this question?

I have a problem. I am very tall and my boyfriend is quite short. When we go to dances together, I think we look funny. My boy friend doesn’t seem to mind at all, but it embarrasses me to the point of tears.

Speaking of surprises, writing a letter to 16‘s Dreamsville contest could win you one of the following: 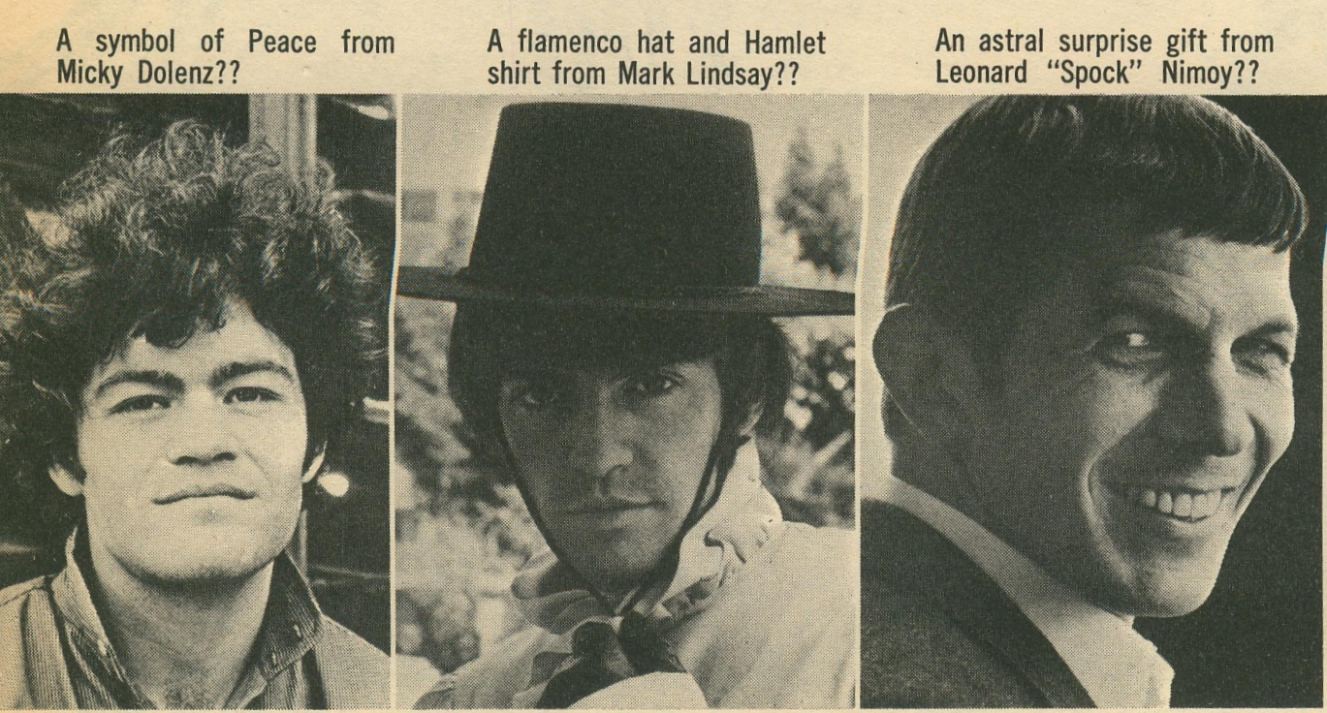 Nimoy’s habit of giving “astral surprises” inspired the invention of those sunglasses that let you see behind you.

Beatlemania still lingered, but it’s only gentle-eyed Paul McCartney who gets a pinup. Otherwise, the less hunky Beatles ’68 only turn up in party photos like this one. How many failing relationships can you spot? 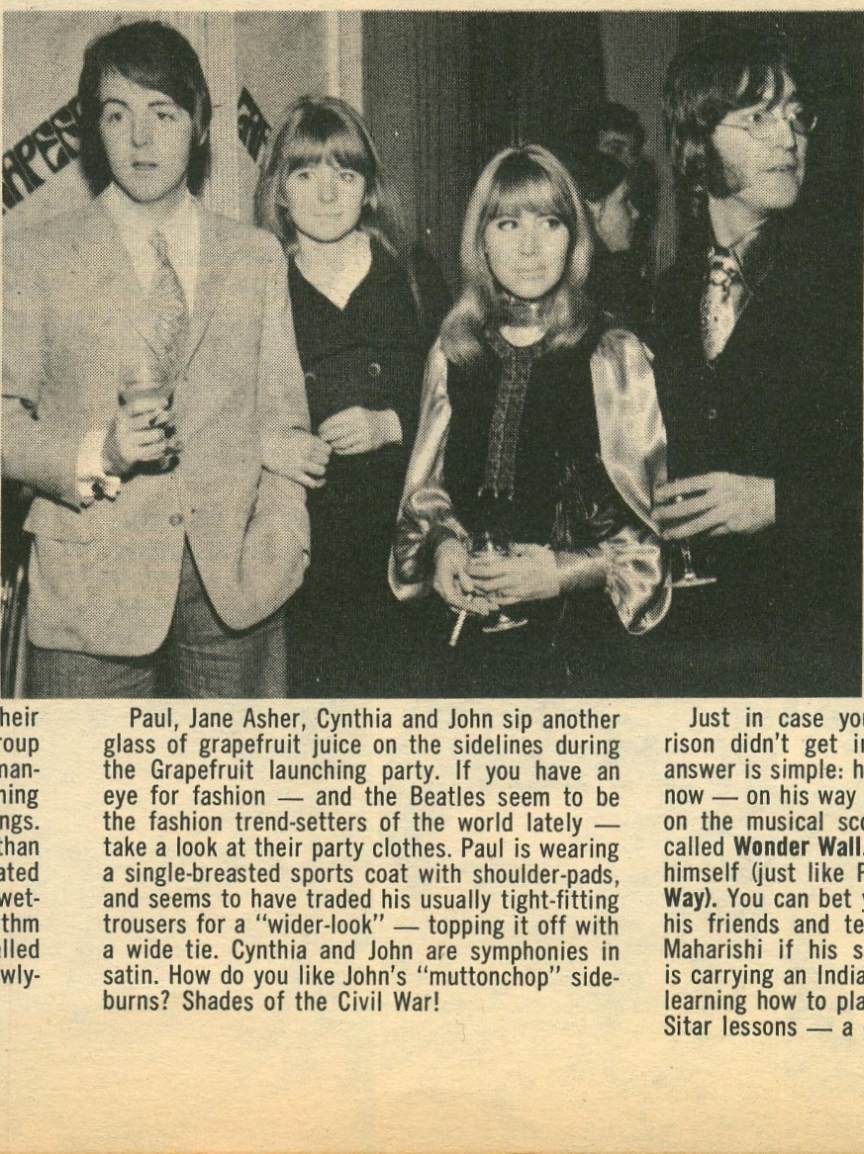 Shocking Detail: Marvin Gaye, Otis Redding, Archie Bell, and the Supremes each scored some of the top hits of 1968, but the Supremes are the only black performers mentioned in 16 at all.

And that’s just on the letters page. 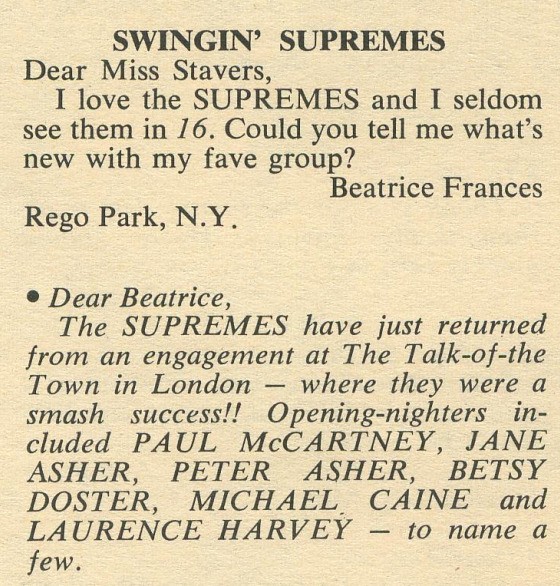 Even there, the 16 editors get distracted by honky hotties. 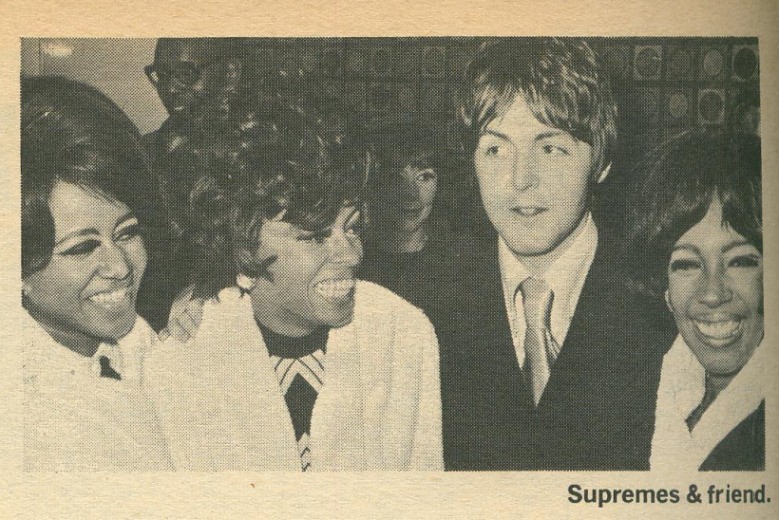 This indignity is hardly the worst that white people have inflicted upon the Supremes. 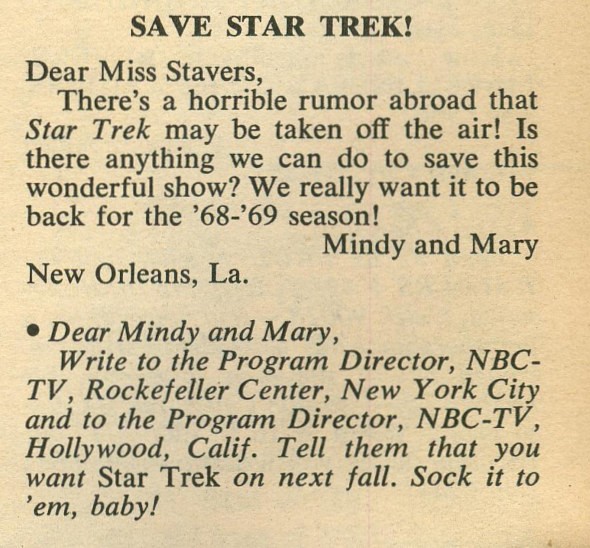 That’s the Sixties, right there. You are the chosen one. You can save Star Trek. You can stop the war. Black people were all right, just so long as they stood next to Paul McCartney. Souls like Jim Morrison’s groove untroubled on a plane of pure beauty and being.