Warm Up With the Best Soups in NYC

Stock, the product of boiling water with (most often) animal bones, vegetables, and savory herbs, has been around for centuries. “Bone broth,” on the other hand, reared its smugly head last year, and the trendy collagen-rich slurry has only gained in popularity, even though the two are essentially the same. Some proponents assert that for stock to be considered bone broth, it requires at least a day bubbling away on the stovetop (for the bones to release the most nutrients, naturally) and a proper drinking vessel. Just like stock, broth helps with inflammation, but its many purported benefits mostly come up short. But that hasn’t stopped celebrities from endorsing the stuff, or bone broth-ers from organizing a festival to memorialize marrow and celebrate their superior health.

Giving in to the concept of bone broth as something new feels like accepting a rebranding of oatmeal as “sipping porridge.” A $9 paper cup filled with bone-marrow-spiked beef is still a paper cup. How about a bowl of soup instead? Here are the ten best in New York. By Zachary Feldman 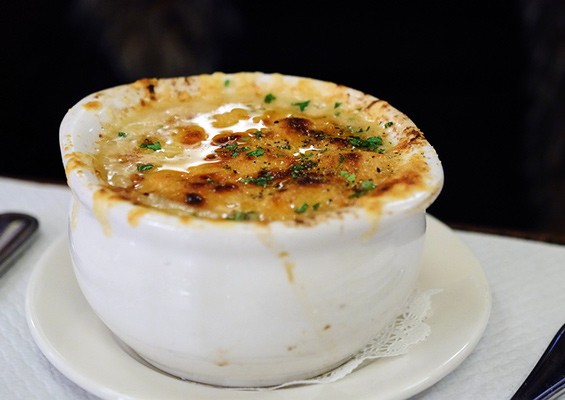 After the recent mirror mishap at Keith McNally's popular Soho restaurant, wherein one of the massive, dusty glass fixtures came crashing down on a group of lunch patrons, you'll want a dining companion with sufficient upper-body strength. Because you, of course, will be too busy dragging your spoon through one superlative bowl of French onion soup, enriched with Port and white wines and a browned cap of melted gruyère, to save yourself or anyone else from disaster. Country bread croutons maintain their crunch while soaking up caramel-colored broth thickened with charred onions. It's easy to see why the kitchen goes through gallons of the stuff each day. 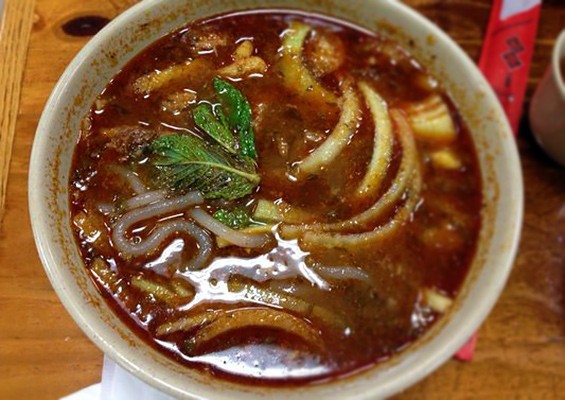 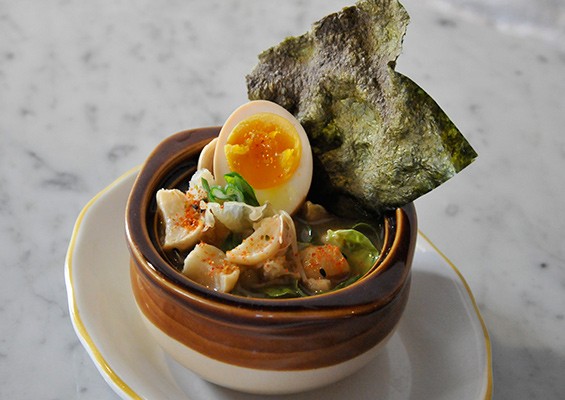 At Ian Alvarez's whitewashed French-Japanese tavern, tucked along a stretch of East 1st Street on the edge of the Lower East Side, the chef dares to broth, ladling tea dashi over sunflower seed purée for a duck entrée. His ramen-inspired chicken soup forgoes noodles in favor of enoki mushrooms, Tokyo turnips, soy-marinated eggs with jammy yolks, and a sheet of nori. Earthy, mellow, and served in a French crock, it's one slick bowl for the soul. 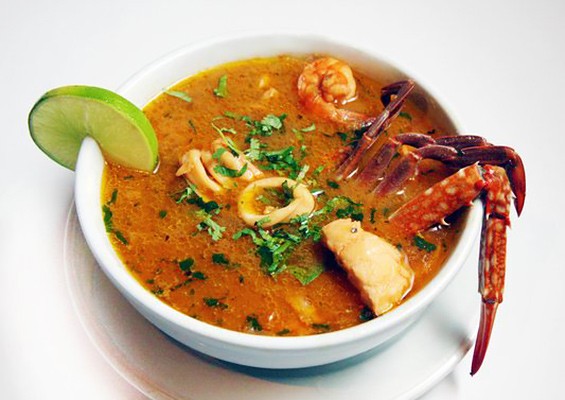 Head out to sleepy Maspeth for a jolt of spice at this airy Peruvian restaurant, which serves a massive bowl of parihuela, a tangy seafood stew buzzing with garlic, shellfish stock, and red and yellow aji chile peppers. Here, the bowl's jammed with enough marine life to stock an aquarium: Shrimp, crabs, clams, and squid all make an appearance. 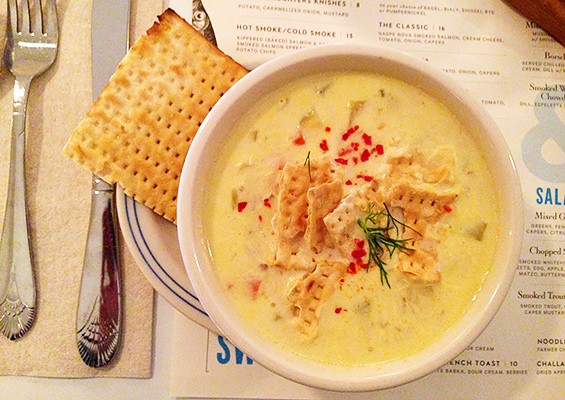 The creative Neo-Jewish cuisine at this sleek spinoff of one of the Lower East Side's most celebrated brands draws crowds that span generations, and it offers a modern take on nostalgic tastes. Based on a Russ family recipe for lox chowder, the cafe's smoked whitefish chowder caters to modern palates with the addition of pricey espelette pepper. Its mellow smokiness softens in the cream base, which hides flaky shreds of whitefish, root vegetable nuggets, and plenty of dill. Topped with two squares of matzoh, it's a soup perfect for any family of five squeezed into a one-bedroom tenement. 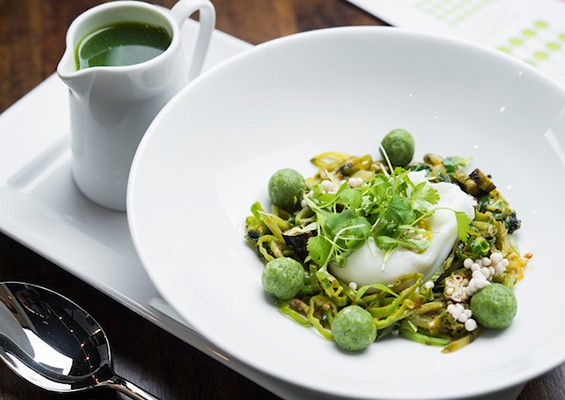 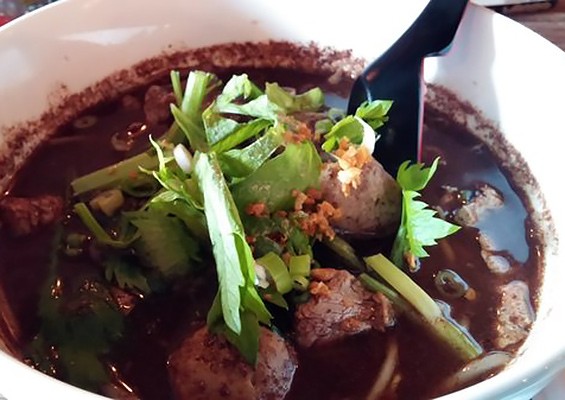 Phimploy Likitsansook lets her hair down at this Elmhurst Thai restaurant, a wild-child sibling to Likitsansook's beloved but tamer Wondee Siam outposts. And if the kids over in Manhattan are spooning Siam's rich curries over rice, Paet Rio might be courting a different crowd with bowls of rusty-colored num tok, an opaque noodle soup seasoned with fresh animal blood. Diners choose pork or beef broths lurking with springy noodles and tender meatballs, the whole murky bowl a tempest of iron-rich, earthy flavors. 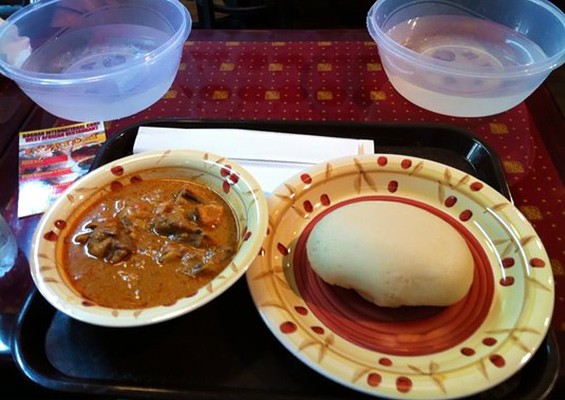 Hearty soups and stews anchor the menu at this Ghanaian restaurant in the Morrisania neighborhood of the Bronx. Okra stews with tomatoes to form a viscous, herbal liquid, while the kitchen melts peanut butter with ginger, garlic, and chiles for aromatic peanut butter soup. Eat them both with fufu, the bulbous doughy mounds of boiled, mashed cassava. 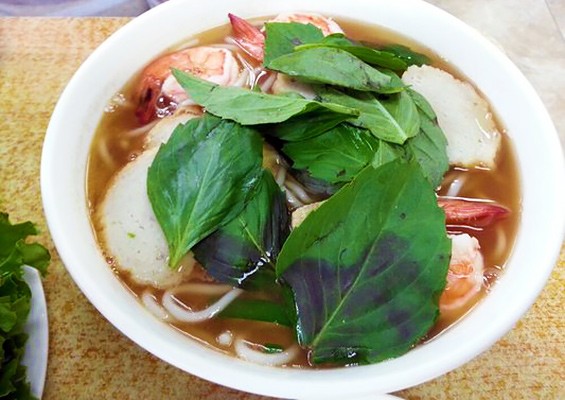 The cheery atmosphere makes up for the cramped confines at this Sunset Park storefront serving banh mi sandwiches and an array of Vietnamese soups, from the ever-popular pho to all manner of rice vermicelli soups, including bun rieu, which banks on salty preserved crab paste. For bun nuoc leo, a canopy of basil hides shrimp and crispy chunks of roast pork, which bathe in an unctuous broth flavored with whole fermented fish that disintegrate during the cooking process.