“What time is it? Showtime!”

Anyone who frequents the L train between First Avenue and Bedford Avenue is familiar with these chants from buskers, known for breakdancing, splitting, and working poles in ways that should be impossible in crammed subway cars. Now the MTA is cracking down on subway pole-dancing with a new ad tut-tutting, “Poles Are For Your Safety, Not Your Latest Routine.”

The ad is part of the MTA’s new campaign, “Courtesy Counts, Manners Make a Better Ride,” targeting uncouth behavior on trains and buses, such as the notorious manspreading, “polehogging,” grooming, eating, and many more. Split between “Do’s” and “No no’s,” the twelve placards will serve as rider etiquette, reminding commuters that “common courtesies go a long way towards making anyone’s trip a bit more enjoyable,” explained MTA spokesman Kevin Ortiz.

In 2014, the NYPD cracked down on subway dancers, and Ortiz says pole-dancing in subway cars has been a problem for the MTA. “We have received complaints,” he said, but he quickly added that the ad is for everyone, including regular riders goofing around.

The MTA began installing the ads in 2,600 subways cars on January 9. Plans are under way to possibly extend the campaign into buses’ and subways’ car announcements. Here are some other admonitions of note: 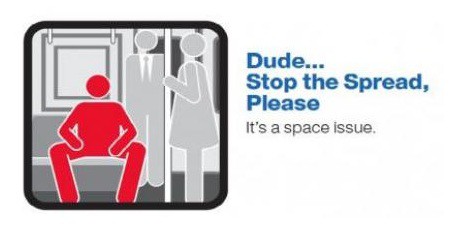