Twelve years ago, Non Phixion released the underground rap manifesto The Future Is Now. Consisting of the emcees Ill Bill, Goretex, and Sabac Red, plus the turntable talents of DJ Eclipse, the quartet resonated like a squad of rugged rap anti-heroes who weaved talk of conspiracy theories and government-funded ruses with street-centric barbs while downing copious drug-infused cocktails. This fiery blend was backed by production split between Bill’s brother Necro and a roster that almost mirrors Illmatic‘s with DJ Premier, Pete Rock, Large Professor and Juju also blessing the boards. The album’s potency stands up today — and it’s recently been given the deluxe reissue treatment by the folks over at Get On Down.

See also: Onyx Reminisce About The Tunnel: “Blood and Moet on the Floor!”

Building on the enduring legacy of The Future Is Now, Ill Bill and DJ Eclipse will be hitting up the Fool’s Gold outpost in Williamsburg on Thursday, June 5th to engage in a good old-fashioned in-store session at 5 p.m. (Fool’s Gold doyen A-Trak also provided scratches on the cut “Cult Leader.”) Being that the reissue of The Future Is Now comes with a bunch of rare and unreleased aural oddities, here’s a primer on dipping into Non Phixion’s pre-album vault of goodies.

Non Phixion, “Legacy/No Tomorrow”
Billed as the first officially released fruits of the Non Phixion adventure, the double whammy “Legacy” and “No Tomorrow” vinyl 12-inch dropped in 1996 under the ambit of MC Serch’s Serchlite Music imprint. “Legacy” charms with its crusty, static-sodden loop, while “No Tomorrow” fuses eerie Necro production with fierce scratches by DJ Eclipse and thug-tuned lyrical barbs about “Abraham bagging grams on the beach in France.” Shout-outs to Canarsie also make their way into the mix.

Non Phixion, “5 Boros”
The rugged rap quartet’s dalliance with MC Serch continued through 1997 with a second vinyl release, “5 Boros” fortified with “Four W’s” on the flip-side. (The latter track was produced by Goretex associate 10k.) The choice pick is “5 Boros,” which features baritone hook-triller-for-hire D.V. Alias Khrist embellishing the listening session, while Bill comes through with a blistering verse about growing up in Glenwood projects and seeing “goons rush up in elevators, ring your doorbell shifty”. (Serch also casts himself as a new rap Dalai Lama.) A remix of the song soon followed, which switched in a more introspective production style from D.R. Period. 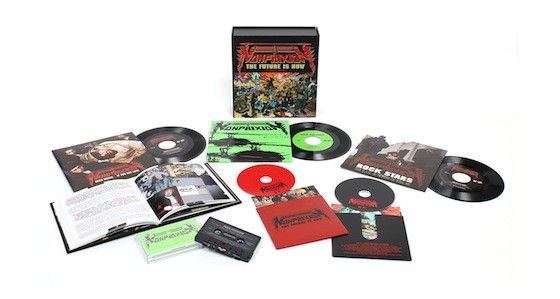 Non Phixion, “I Shot Reagan”
A potent blast of Non Phixion’s vitriol, this presidential assassination endorsement was recorded at the group’s Canarsie studio Area 51 and is powered by Necro’s subtly brooding flute-flourished production. Lyrically, the crew come through with a signature dose of conspiracy theory chat and wantonly paranoid musings. According to Ill Bill, the track was inspired by the Suicidal Tendencies song “I Shot The Devil.” The b-side cut, “Refuse To Lose,” is equally potent by virtue of Necrodamus’s hauntingly funky beat and a choice Chuck D vocal grab.

W.H.T., “14 Years Of Rap”
A full-on verbal blitzkrieg from Ill Bill, Goretex and Arsonists members Jise One and Q-Unique that dropped in ’99 under the umbrella of W.H.T. Multiple casualties are clocked up as the impromptu quartet roll through their lyrics, while the video smartly pays homage to the TV show Graffiti Rock.