Dan Witz is painfully familiar with the sweat-stained violence of New York hardcore punk concerts. Attending shows in Brooklyn and Long Island by the bands Agnostic Front and Vision of Disorder, Witz has suffered black eyes, a broken finger, and various cuts and bruises. He once had a camera slammed into his face. He started wearing steel-toe boots to protect his feet.

But now, standing in front of one of the massive paintings that resulted from Witz’s experiences, the abuse seems totally worth it. At nearly six feet across, the canvas is huge. It’s alive with the feeling of bones cracking and the dull thud of flesh slamming into flesh. The scene is organized chaos, with pale tattooed limbs flailing aggressively. In the vortex of the pit, a skinhead with sleeves of tats protruding from his tank top has the facial expression of a wild, hungry animal released from a cage.

“This guy is just fucking crazy,” Witz says. “He didn’t even know where he was. He ran into me and it was like a horse. His eyes — he didn’t even see me. He’s like, ‘Sorry, man!’ and then he just started going again, so I followed him around. He’s in all my paintings several times. He’s in this one, yawping in the background. I love that guy.”

With eyeglasses dangling around his neck and a frizzy head of gray hair, the 56-year-old Brooklyn artist is not the guy you imagine getting banged around in a mosh pit with angry skinheads. Witz borrows a phrase from Walt Whitman’s “Song of Myself” to describe his fascination with hardcore music: “the barbaric yawp.”

“That’s sort of the essence of this kind of music,” Witz says, perched atop a stool in his cluttered, attic-like studio in Williamsburg. “The barbaric yawp. ‘I sound my barbaric yawp over the roofs of the world.’ The problem with that fucking thing is they used it in Dead Poets Society, so it’s kind of lame now, but I don’t care.”

Attending concerts is essential to making his paintings, but Witz is not exactly a fan of the music. He is drawn to the energy of the crowd, the out-of-body experiences and uncorked aggression that come with a soundtrack of thrashing power chords. Getting the shit kicked out of him, he says, is a way of “trauma bonding” with his subjects.

Witz has painted mosh pits for more than a decade, and on April 5 he will display his newest work at a solo exhibition at Jonathan LeVine Gallery in Chelsea. The show is titled “NY Hardcore,” and the works are a testament to the enduring popularity of the genre. The music dates back to the late ’70s and ’80s, but can still be heard today at clubs like Revolution on Long Island, and Saint Vitus and The Acheron in Brooklyn.

“There’s an authenticity, ultimately, that is there that you don’t find in other music, a kind of a rawness,” says gallery owner LeVine, who came of age at New Jersey hardcore shows. “If you’re growing up and feel alienated, if you’re some sort of creative weirdo, it’s the place you go and let your aggression out. It seems negative, but there’s camaraderie, and the spirit of it is more positive. Dan’s painting represents this struggle and violence, this aggression, a lot of things.”

Born in Chicago, Witz came to New York in 1978 to study art at the Cooper Union. Witz says the city’s punk scene “had already become about hair and having the right leather jacket,” but the don’t-give-a-fuck vibe of the gritty East Village inspired him to create street art and join a band.

Witz ended up playing keyboards for Glenn Branca, the avant-garde composer and noise rock pioneer who mentored Sonic Youth. The music was droning, almost unlistenable, and often used weirdly tuned and modified guitars. Witz chooses the words “super challenging” and “super loud” to describe the sound, with live performances that were “crazy absorbing.”

“I was actually a crappy musician,” Witz says. “That’s why they liked me, because I couldn’t play. It was a non-musician movement. Knowing how to play or knowing chords wasn’t the idea. It was very intense. People were really into it and really passionate about it. Every concert was a real group lift. It wasn’t bogus. It wasn’t bullshit. It was real.”

Witz eventually quit the band to pursue his art career full-time, a move that proved wise. He went on to become a godfather of the street art movement, and he works on a prisoner rights campaign with Amnesty International. He gets paid to tour Europe and North America making creepy street paintings of figures behind bars. 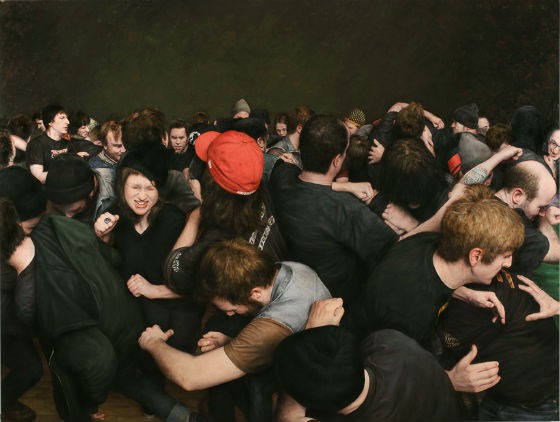 “I really mourned that I would never feel that intensity [of performing] if I went back to painting, which I was of course totally wrong about,” Witz says. “Not only do I get to do [the mosh pits], but street art is crazy intense, running around with the cops and going to Europe and attacking cities and stuff. I was wrong about that — my career is about sustaining that type of intensity I felt while performing.”

Witz spends about four months creating each painting. He uses a camera mounted on a pole to photograph crowds at the concerts, then digitally edits files from several different shows to create a collage of his favorite characters. He prints a base layer in green on the canvas, and then meticulously paints over it to bring the subjects to life. He says the technique is modeled on the work of classic painters such as Breughel, Vermeer, and Rembrandt, and his style involves creating “a subliminal feeling of unbalance and just sort of fucking with all the sort of rules of traditional stable painting.”

“I think about those guys while I paint,” Witz says. “That’s how I do ’em. I know all their stories, their biographies, and all that. It’s like when I was in bands, there were people like the Sonic Youth guys. They were so smart. They just, every song, they knew every riff — ‘oh yeah, and you did the drum fills like that’ — they were really involved in that shit. I’m the same way about these guys.”

Witz has struck up a friendship with Tim Williams, the lead singer of Vision of Disorder. The men are neighbors in Brooklyn, and Williams says he was initially skeptical when his artist buddy told him about his plan to photograph and paint mosh pits at his concerts.

“He showed up with all this gear in the pit getting knocked around,” Williams says. “I was like, man, he’s really getting in there. He was so into it. Then later, to see them come to life, it was like, whoa. He was really serious. It’s a crazy feeling to see the crowd though a snapshot like that. For a second you can kind of remember that show and where you were and the expression on people’s faces.”

Oddly enough, Witz doesn’t listen to hardcore when he’s working on the paintings. Instead, he says he prefers mellow, minimalist jams by Brian Eno and other ’80s electro masters.

“The music sort of leavens it out a little bit so I don’t get too crazy in my head,” Witz says. “I’m not really a fan of hardcore. I’m a fan of the concerts. It’s the same thing as the music I used to play. I never listened to it recorded. You just have to go and see it. It’s like these paintings — you have to see them in real life. When you actually see these things in person, I want them to grab you by the balls.”