Baked in a dish or swaddled by a crust, savory pies are essentially just self-contained stews — and you already know our feelings about those. So indulge your inner carnivore. 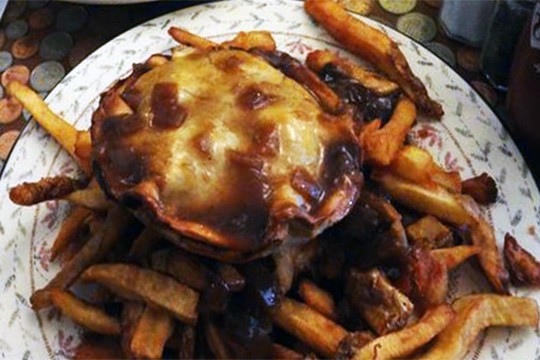 10. ChipShop, 129 Atlantic Avenue, Brooklyn; 718-855-7775 Deep frying goes gonzo at the flagship location of this Brooklyn restaurant mini-chain specializing in fish and chips and other UK fare. There’s a time and a place for fried cherry pies and battered chocolate confections, but for a hearty meal that warms right to the core, look no further than the steak and kidney pie. There’s an offal-less steak pie on the menu as well, but the kidneys add a wonderful iron undercurrent to the thickened stock that coats each piece of meat. Like a beefy warrior lording over its fallen starch enemies, the pie sits atop a pile of the shop’s excellent thick-cut chips. 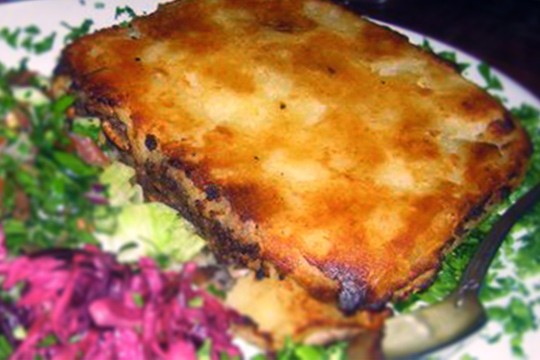 9. Tanoreen, 7523 Third Avenue, Brooklyn; 718-748-5600 Rawia Bishara’s Bay Ridge favorite is beloved for its bold flavors rooted in the foundations of Middle Eastern and Mediterranean cuisines. But beyond the delectable dips, spreads, and grilled meats are a number of fun and ultimately successful tangential dishes like shawarma sliders and a bronzed brick of shepherd’s pie. A browned layer of garlic mashed potatoes hides cumin-spiced lamb mixed with chopped almonds. It’s hearty without being overly rich, and an accompanying side salad helps lighten things further. You might even have room for dessert. 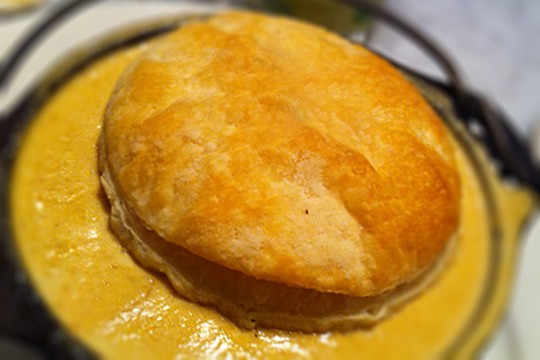 8. Ed’s Lobster Bar, 222 Lafayette Street, 212-343-3236 Crustacean czar Ed McFarland serves his lobster pot pie in a miniature cast iron cauldron. Hit with a dusting of black truffle salt prior to baking in the oven, the steamed lobster chunks work their osmotic magic on the stew, melding with mushrooms flambeed in sherry. Cracking into the engorged disc of puff pastry that tops the dish begins a dangerous race to the finish that only you and your mouth can complete. [ 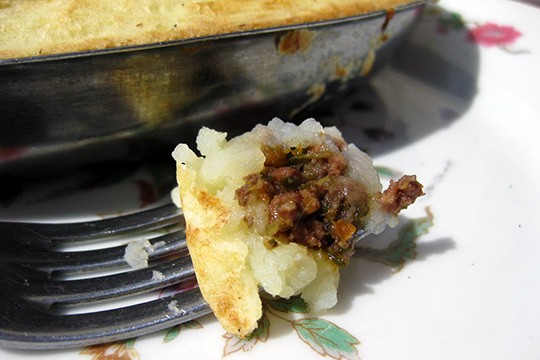 7. La Villette, 10 Downing Street, 212-255-0300 How do the French do shepherd’s pie? Hachis parmentier isn’t much different from the UK original save for the addition of white wine-enriched sauce lyonnaise. The mashed potato crust gets some much-needed earthiness from being laced with truffle butter. Served at brunch exclusively, this is one seriously decadent hangover cure. 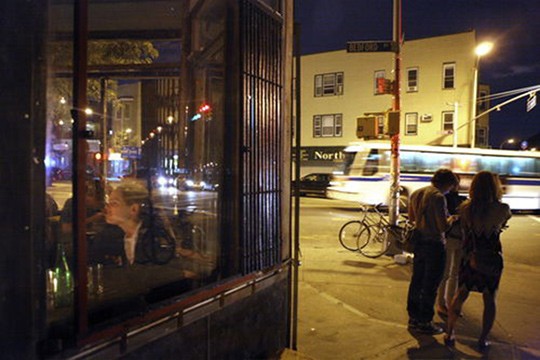 6. Five Leaves, 18 Bedford Avenue, Brooklyn; 718-383-5345 Like many of the dishes at this nautical-themed Greenpoint standby, the shepherd’s pie features unexpected flourishes to achieve exciting results. To wit: Ground lamb gets a dose of heat from cayenne pepper, and the usual top-layer of potato is blended with celery root for sweetness. Browned and crackly, the crust sports a topping of honey-roasted root vegetables. 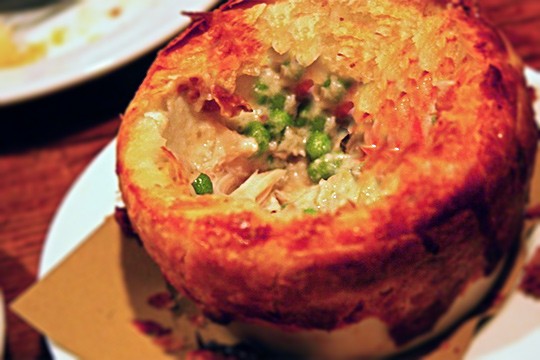 5. Gottino, 52 Greenwich Avenue, 212-633-2590 At this Italian wine bar, the bastard boot-centric sibling of Jody Williams’ Francophillic Buvette, the kitchen still puts out a version of the chef’s rabbit pot pie despite litigative entanglements between the two parties. Now that Buvette is an outright success, with a Parisian outpost and NYC waits of up to 2 hours during primetime, we like to get a taste of Williams’ rustic cooking without the blasé attitude. A creamy mixed vegetable base studded with rabbit meat hides beneath a bulbous crust risen like a soufflé that covers the ramekin holding the dish’s contents. 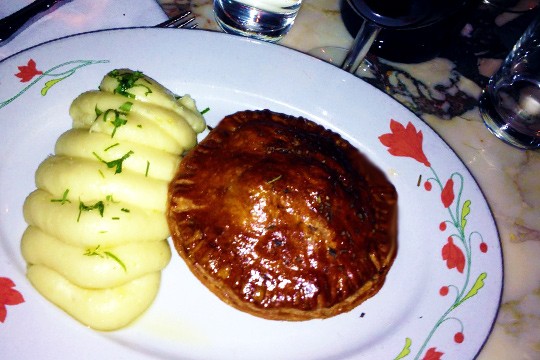 4. Jones Wood Foundry, 401 East 76th Street, 212-249-2700 When Jason Hicks opened his smartly-appointed pub on the edge of the Upper East Side, pint-happy patrons flocked from well beyond the restaurant’s tony 10021 zip code for crumpets, toasts, and plenty of UK staples (including a top notch plate of bangers and mash). Of particular note are the chef’s pies, including a lamb and rosemary number whose crust shines like porcelain under the candlelight that graces every table. Slice into it and large hunks of soft meat spill out onto the plate, the gravy puddling next to a fancifully-piped ripple of mashed potatoes. [ 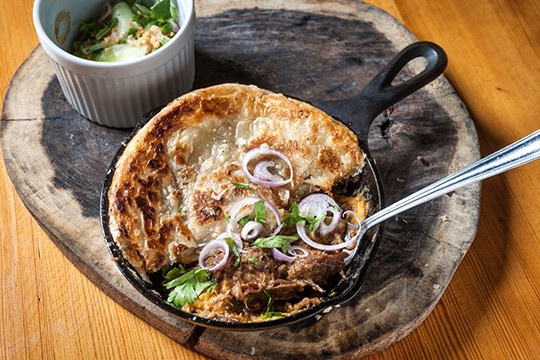 3. Ngam, 99 3rd Avenue, 212-777-8424 When it comes to marrying the flavors of Southeast Asia with dishes that North Americans know and love, Hong Thaimee is all but unmatched. After conquering the almighty hamburger, the model-turned-chef has whipped up an addictive twist on a western classic with her take on the humble pot pie. Meltingly soft shredded lamb shoulder simmered in massaman curry sits underneath a blistered roti bread crust, run through with sweet potatoes and cashews for texture and complexity. Pickled cucumbers sit on the side for tart relief. 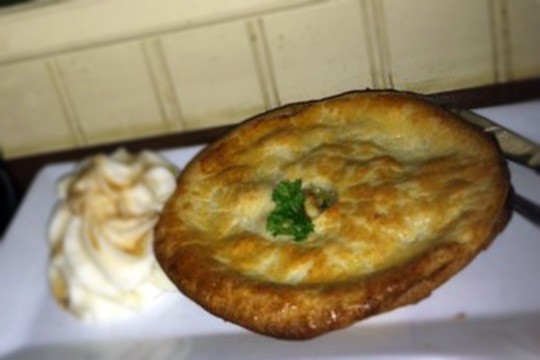 2. The Dead Rabbit Grocery and Grog, 30 Water Street, 646-422-7906 Boasting numerous national and international accolades for its incredible cocktail program and pub, the food at this antiquarian two-story drinker’s paradise is better than it has to be. The steak and stout pie, with its burnished crust and wide circumference, finds ample chunks of steak mingling with mirepoix in a luscious stout beer gravy. Served with a side of mashed potatoes covered in more gravy, it’s an especially filling meal — even more so on Tuesdays, when pie orders come with a free pint. 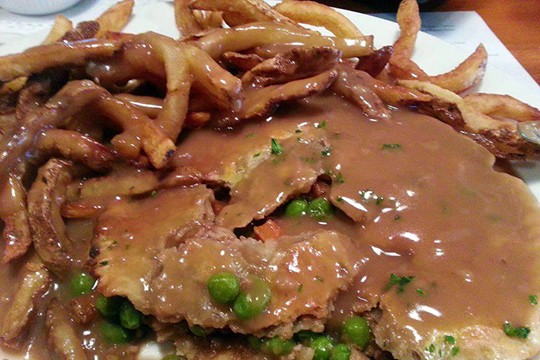 1. The Chelsea Pub, 362 West 23rd Street, 646-998-5831 The grub at this pub from the owners of neighboring Westside Tavern gets very “gastro” indeed with a list of pies that would make Georgie Porgie forget about pudding entirely. Chicken pot pie and Shepherd’s pie both make appearances, but it’s the atypical selections — coconut curry chicken, artichoke and pepper, and mac and cheese with bacon among them — that keep drawing us in. Organ meat fanatics should make it a point to try what seems be the city’s only gravy-soaked sweetbread pie; the nuggets of offal rendered soft and creamy. Skin-on spuds fried crisp (and also smothered in gravy) come piled high next to the savory pastry.