Best Tweets about the Arrested Development Banana Stand, which is at Columbus Circle today

Fans are loving the Arrested Development frozen banana stand that hit London last week and Radio City Music Hall yesterday. The stand will be at Columbus Circle from noon to 7 p.m. today, and Terry Crews, who has a cameo on the show’s third season, will make an appearance from noon to 1 p.m. Bluth-o-philes can also find the stand in Times Square on Thursday.

Expect to wait, though: There were only 1,500 bananas available at yesterday’s stand, and the hours-long line stretched around the block.

The show is known for its one-liners, running gags and famous sayings like “There’s always money in the banana stand.” Fans on Twitter reacted with Bluth-y gusto and recounted some of their favorite Arrested Development moments in the stand’s honor. The best tweets:

HOLD UP- there’s a Bluth’s Original Frozen Banana stand in midtown? Then I will meet you down at the big yellow joint. #arresteddevelopment

@arresteddev so excited to visit the #bananastand I’m planning my escape from work, hopefully Mr Manager won’t notice… half day from Army

I have a serious desire to set up a cornballer stand beside the banana stand outside Radio City, right now.

two blocks worth of people about to blue themselves for the banana stand @arresteddev #bananamosphere… instagram.com/p/ZQfcT5kbDe/

And a bonus reaction on Seamless: 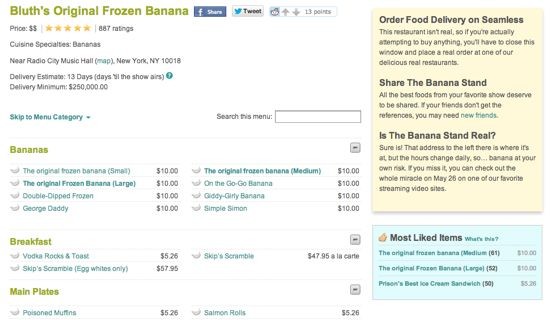