Cold? Tired? Not fond of coffee but crave the caffeine? Maybe mate is your beverage. More properly known as yerba mate, the hot drink is made from the dried leaves of a shrub related to holly that grows in the northern reaches of Argentina. It is drunk in that country, as well as in Paraguay, Uruguay, and parts of Brazil. The beverage was of Indian origin and first popularized among European settlers in the late 16th century.

The beverage is made by steeping a big wad of mate leaves in a vessel traditionally made from a gourd, often covered in incised leather. A silver straw with a sieve – which filters the tea on the way to the mouth – is used to drink the beverage. A teapot of hot water comes alongside, and as the tea is drunk, more hot water is added to the leaves.

In this way, one can drink yerba mate for long periods of time by renewing the water in the gourd. The beverage becomes agreeably more dilute as extra quantities of water are added and drunk. The first few steepings are often harsh in a grassy sort of way, and astringently bitter. Mate is clearly an acquired taste.

In Buenos Aires, one sees pedestrians strolling along pulling on their mate mugs. When the tea leaves are finally exhausted, they are often tossed into the gutter. As one walks the streets, little steaming piles of mate are to be seen.

Yerba mate can be found in New York at Kalustyan’s, among other places.

A complete post-meal mate service in traditional vessels can be found at Cucharamama, a very good pan-South American restaurant in Hoboken, for $6. 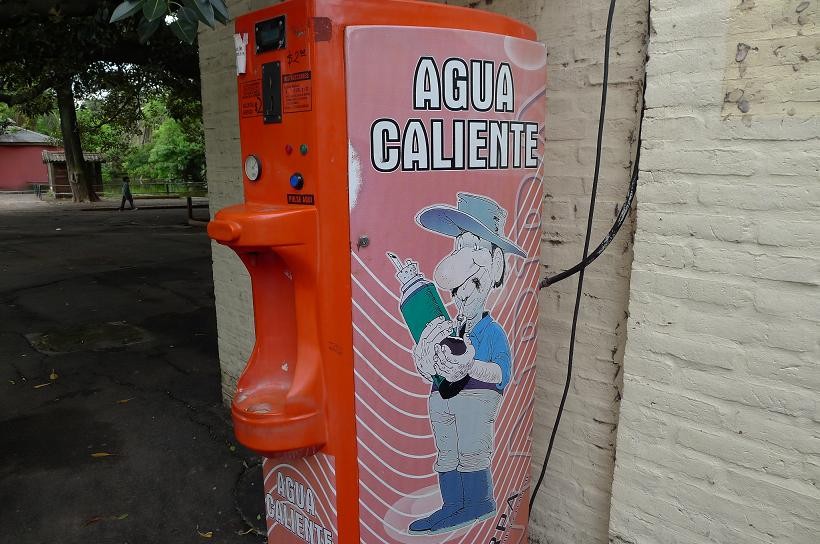