New York City is full of fancy restaurants where people go for a spirited night on the town, to sample the exquisite creations of chefs in vogue, while sitting shoulder to shoulder with the other hundred diners in the know. Then there are the restaurants for the city’s homebodies, people who would rather be holed up in their living rooms with big plates of pasta than at crowded, noisy restaurants. These places recognize that when the homebodies of the city are lured out of their apartments, they pretty much want to eat exactly what they would have eaten at home — just prepared expertly and interestingly by a professional chef; their menus feature comfort foods, dishes you would enjoy at a cozy, private dinner for two, a backyard barbecue, or a family dinner.

As the newest member of the Fork in the Road team, I might as well let you know now that I’m one of these homebodies at heart. And I’m often forced to reconcile my persistent desire to stay in with the need to try out every restaurant that piques my interest by ordering my favorite comfort foods when I’m eating out. So below is a list of the best of these dishes, served at restaurants that manage to make you feel at home, even in the middle of the bustling city.

10. Feijoada at Casa Restaurant: Having grown up in Miami among people from all over South America and the Caribbean, I crave the rice and stew dishes that I used to eat at my friends’ and family’s backyard parties. Feijoada, a Brazilian stew with beans, beef, pork, and vegetables, prepared in a clay pot, simmered for hours, and served with rice and collard greens perfectly encapsulates the earthy, spicy flavors of Latin-American home cooking. Casa Restaurant’s feijoada, eaten alongside its freshly made pão de queijo, is a meal worth writing home about. Casa Restaurant (72 Bedford Street, 212-366-9410) 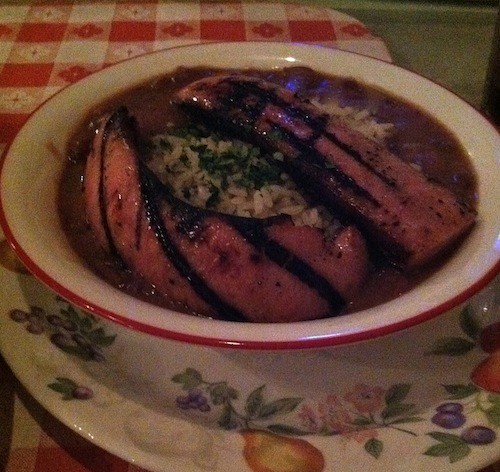 9. Red Beans and Rice With Smoked Sausage at Sugar Freak: Maybe Louisiana Cajun cooking is not the first thing that comes to mind when you think about Astoria, but that’s where you’ll find some of the best red beans and rice around. Sugar Freak’s beans get a good dose of spice from pieces of potent andouille, and the whole thing is topped with a tender smoked sausage. Sugar Freak (36-18 30th Avenue, Queens; 718-726-5850)

8. Bacon Jalapeño Corn Bread at the Brooklyn Star: Smell is everything when it comes to cornbread. While it’s cooking in the oven, a cornbread loaf lets off steam, both sweet and savory, that wafts out of the kitchen reminding you that dinner is not too far away. This particular aspect of the cornbread-eating experience is honored at the Brooklyn Star, where the cornbread is brought to the table piping-hot from the oven in a cast-iron pan. You can almost taste the deep smokiness of the bacon and the piquant flavor of the hot peppers, while you wait for the whole thing to get cool enough to eat. The Brooklyn Star (593 Lorimer Street, Brooklyn, 718-599-9899)

7. Fried Chicken at Pies-N-Thighs: The Basque philosopher Bernard-Paul Heroux once remarked, “There is no trouble so great or grave that cannot be much diminished by a nice cup of tea.” Well, the same can be said of a fried chicken platter. This is particularly true in the case of the chicken at Pies-N-Thighs, which manages to remain moist, with a full, meaty flavor, even after being dipped in hefty batter and deep-fried. Adding on some biscuits, baked beans, mac and cheese, and banana cream pie for dessert are all good ways to amp up the pleasure quotient. Pies-N-Thighs (166 South 4th Street, 347-529-6090)

6. Tagliatelle al Ragù at Osteria Morini: If you ask anyone from the Emilia-Romagna region of Italy what food most reminds them of home, they will almost always talk about their mother’s ragù. In Bologna, Italy, where I lived for two years, ragù recipes are kept private, and passed down in families as part of the patrimony. (At least that’s what I was told by several home cooks when I tried to squeeze recipes for the dish out of them.) But you probably don’t want to make the whole thing from scratch anyway — it’s very labor-intensive. So unless you have hours to kill on a Sunday, head to Michael White’s Osteria Morini, and try the intensely meaty, savory ragù alla Bolognese folded over ribbons of fresh tagliatelle pasta. Osteria Morini (218 Lafayette Street, 212-965-8777) 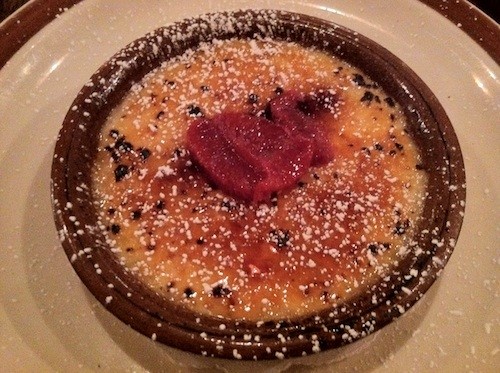 5. Arroz con Leche at Sala One Nine: I grew up eating the Colombian version of rice pudding, arroz con leche, which uses evaporated and/or sweetened condensed milk for maximum creaminess, and is served warm with plenty of cinnamon sprinkled on top. Sala One Nine, an endearing Spanish restaurant in Flatiron, offers a nice twist on this dessert. Its arroz con leche is made with bomba rice (a short-grain variety used for paella), which stays firm amid velvety pudding flavored with cinnamon and brandy. A caramelized sugar topping and blood-orange compote liven up the dish. Sala One Nine (35 West 19th Street, 212-229-2300)

4. Spicy Ramen at Kuboya: In Japan and Midtown, ramen is primarily a quick meal for hungry businessmen, but the East Village there are intimate ramen restaurants where you can linger over your bowl of steaming noodles for hours. One of these places is Kuboya, where you can order a large bowl of spicy miso ramen with a rustic quality that derives from its broth made with shiitake mushrooms, nori, and miso. The restaurant serves one of the best bowls of spicy ramen out there — though Ramen Setagaya and Minca are also good destinations for the dish — and gets extra points for its laid-back ambience. Kuboya (536 East 5th Street; 212-777-7010) 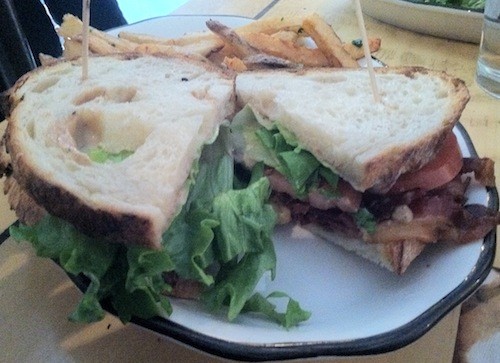 3. The BBLT at Penelope: A double serving of bacon, freshly baked sourdough bread, and ripe tomatoes: You can’t really ask for more out of a BLT. But Penelope’s BLT has an extra-special element — mayonnaise made with balsamic vinegar and fresh pepper that perks up the bacon’s rich flavor, giving the sandwich balance and pizzazz. Penelope (159 Lexington Avenue, 212-481-3800) 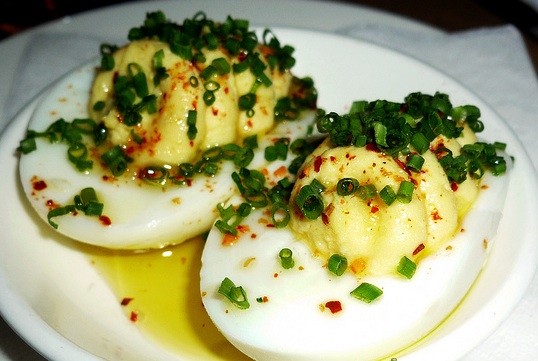 2. Deviled Eggs at the Spotted Pig: Briny with a fluffy yolk mixture, these deviled eggs are a super-gourmet version of the family picnic dish. They come topped with fragrant olive oil and plenty of chopped chives. Eating at the Spotted Pig can be overwhelming at dinner, but the restaurant is the perfect place for a leisurely lunch. The Spotted Pig (314 West 11th Street, 212-620-0393)

1. Spaghetti and Meatballs at Brucie: Italian-American chefs and home cooks have been perfecting their recipes for this dish since the beginning of the 20th century, yet it’s still hard to find a first-class plate of spaghetti and meatballs at a restaurant. Brucie’s spaghetti and meatballs, though, are just that. In the dish, thick spaghetti, cooked al dente, grips abundant amounts of tangy red sauce. The meatballs are not falling-apart tender but are bright and texturally varied, highlighting their fresh ingredients: organic meat and lemon zest. In keeping with its homey feel, Brucie runs a takeout service in which customers can come to the restaurant with pots from their own kitchens and have them filled up with meatballs. Brucie (234 Court Street, Brooklyn; 347-987-4961)