We’re sorry, but 2010 has been a dreary slog (Tea Party, anyone?), which is reflected in just about every graphic narrative that moved us this year. But we won’t let darkness visible obscure the intense artistry found in our picks of 2010’s best comics and other illustrated provocations.

For starters, we now know what 1930s anti-Nazi collagist John Heartfield would have done with the physiognomies of Hitler and Goebbels if only he’d had Photoshop. In Repuglicans (Boom Studios, 128 pp., $14.99), Pete Von Sholly brings every right-wing potentate from Newt to Sarah to undead life with bloated, pustular flesh, frothing fangs, black-oil eyes, and other colorful grotesqueries. Steve Tatham’s pithy commentary confirms that the policies of these demagogues are every bit as monstrous as their portraits.

Even more horrifying, Danzig Baldaev’s Drawings From the Gulag (Fuel, 240 pp., $32.95) documents the phantasmagorical evil of the Soviet prison system. Female “enemies of the people” were thrown into cells to be gang-raped by thieves and murderers; children of imprisoned dissidents were given a “ticket to a happy childhood”—a euphemism for a bullet to the head. One prisoner lamented that “a human being survives by his ability to forget,” but Baldaev (1925–2005), who served as a camp guard and risked his own freedom to create these unflinching, painstakingly crosshatched scenes, knew that forgetting only allows such horrors to be repeated.

The Sinister Truth: MK Ultra (Pop Industries, 102 pp., $11.95) exposes our own government’s nefarious experiments with mind control and the CIA’s 638 different plots to kill Castro (and you thought it was only exploding cigars). Jason Ciaccia’s tale of LSD-crazed assassins would seem ridiculously hyperbolic if it weren’t derived from the CIA’s own files. With nods to Grosz, Bacon, and Steadman, Aaron Norhanian’s fervid ink drawings propel this witty hybrid of underground comix and the History channel right over the top.

Another aspect of America’s id gets probed in The Horror! The Horror!: Comic Books the Government Didn’t Want You to Read! (Abrams, 304 pp., $29.95). Jim Trombetta’s exuberant prose posits that postwar visions of atomic Armageddon, combined with rebellion against the era’s social constipation, inspired paroxysms of four-color mayhem. Bluenoses all around the country held comic books up as examples not only of why Johnny couldn’t read but also why he was out raping, robbing, and killing. Copious color reproductions highlight the lucid lunacy of Basil Wolverton, the proto-psychedelia of L.B. Cole, and other inspired craftsmen of the macabre.

By 1955, Congressional pressure had driven horror comics out of business, but in less than a decade Creepy and Eerie magazines resurrected the genre like some reanimated corpse seeking revenge on its own murderer. Darkhorse’s striking reprints (currently at 13 hardcover volumes, $49.95 each) reveal such industry giants as Gene Colan, Russ Heath, Jerry Grandenetti, and Alex Toth using ink wash, crosshatching, and swathes of Zip-a-tone to lend their murderers and monsters convincing presence. These always entertaining, occasionally brilliant stories — see Archie Goodwin and Steve Ditko’s kaleidoscopic time shifts in “Collector’s Edition” (Creepy Vol. 2) — gain force from the lithe black-and-white layouts.

Meanwhile, contemporary horror keeps coming at us like a zombie tsunami. Julia Gfrörer’s Flesh and Bone (Sparkplug, 40 pp., $6) features ardent line drawings of wan figures that might have escaped from an Elizabeth Peyton painting. This unearthly collision of witchcraft, gruesome love, and pathetic death dissipates into a truly poignant climax.

No one, however, can transform the workaday into existentially bleak page-turners like Chris Ware. His tales of myopic relationships and enervated dreams shimmer with eloquent graphics, precisely tuned dialogue, and perfect-pitch body language. In Lint, Acme Novelty Library Vol. 20 (Drawn & Quarterly, 72 pp., $23.95), we see parents’ faces slowly come into focus through their baby’s eyes, watch the young Jordan Lint grow into an adult-scaled world, then follow his punctured ambitions and bumptious middle-aged affairs to the moment when everything contracts back down to that first dot of consciousness. Astonishing.

Also dazzling, Dirty Baby (Prestel, 160 pp., $125.00) begins with Ed Ruscha’s paintings of blurrily silhouetted sailing ships and foreboding tract homes overlaid with white bars implying censored phrases. Each of these mysterious images is counterpointed by David Breskin’s witty poetry (derived from such Ruscha titles as “Be Cautious Else We Be Bangin’ on You”). Rather than explicate the pictures, the poems seek to metaphorically fill the blank areas with fresh interpretations. Nels Cline’s clashing musical harmonies (included on four inset audio CDs) further stitch poetry and canvas together into a mordantly funny, amorphously beautiful genre Frankenstein.

But if you’re looking for the current gold standard in straight-up comic-book artistry, Darwyn Cooke is your man. The Outfit (IDW, 160 pp., $24.99), like last year’s The Hunter, sets one of Donald Westlake’s crime thrillers against Rat Pack–era backdrops, where antihero Parker wages a profitable war on syndicate bosses who want him dead. Westlake’s cynical characterizations — a thrill-seeking society girl pouts when a would-be hitman confesses before he can be tortured — merge with Cooke’s diverse layouts and visceral figures to keep the plot burning rubber from wire to wire. 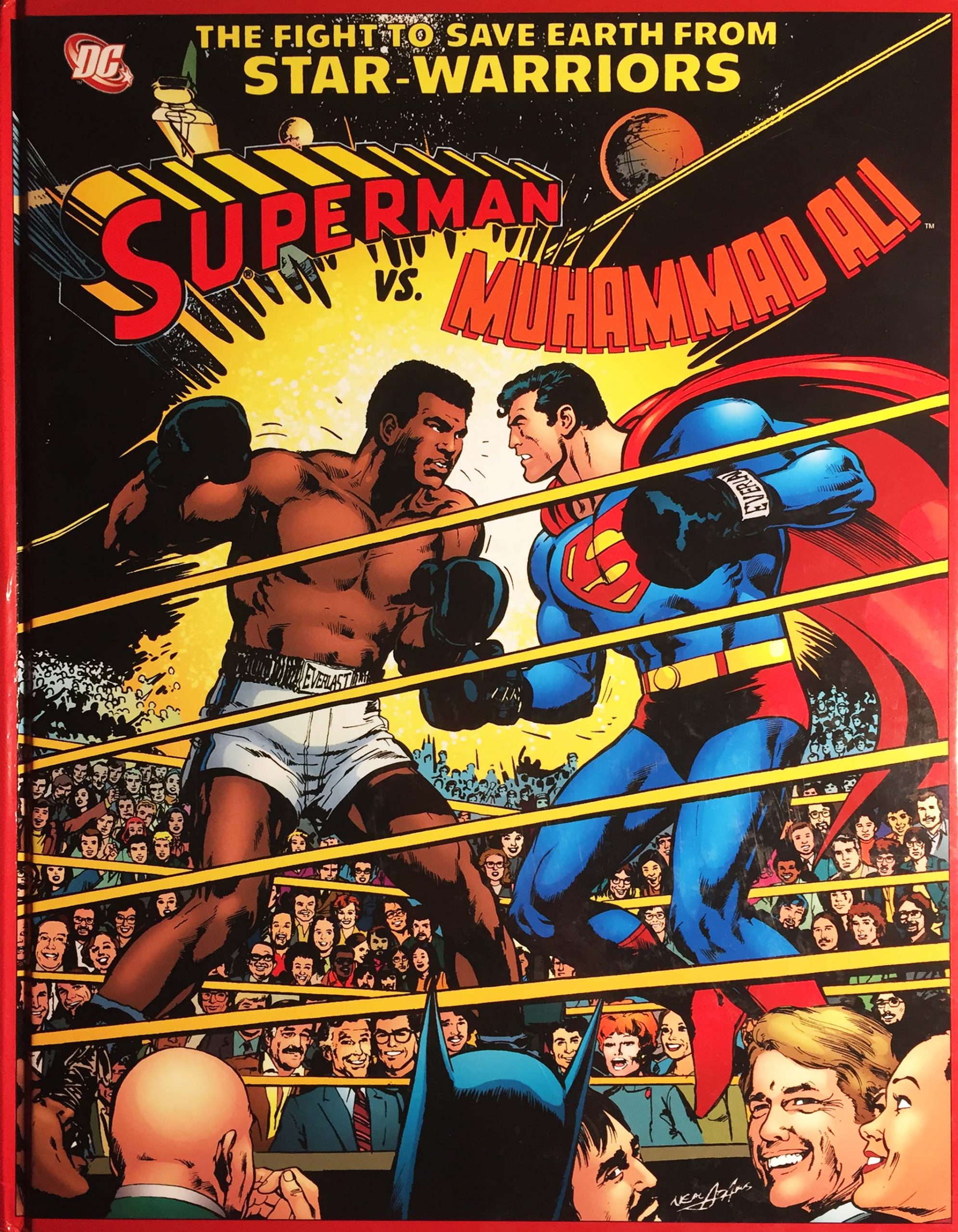 Neal Adams set equally high standards in the 1960s and ’70s with masterful renditions of characters as disparate as Jerry Lewis, Deadman, and Batman. In 1978, Adams, along with the virtuoso writer Denny O’Neil,  yanked out all the stops to portray that era’s most incandescent personality in Superman vs. Muhammad Ali. DC has reprinted the original oversize comic in a lavish facsimile edition (80 pp., $39.99) that provides a nostalgic respite from our current national malaise. The plot opens in the ghetto as the Champ plays hoops with a multiracial gaggle of kids, but it’s not long before an alien armada arrives to lay waste to Earth. Things get progressively wiggier as Supes and The Greatest take their lumps in the ring against the humongous invaders; Adams’s hyperkinetic action sequences are barely contained by the page margins. The book closes on a poster-size spread as the two heroes shake hands after truth, justice, and superior fisticuffs have straightened those freakin’ aliens right out.

So maybe there’s hope for the American way, after all.

And here are a few online bonus items to round out our admittedly idiosyncratic baker’s dozen of the year’s best:

Simon and Schuster’s new “Pulp History” line digs into America’s seamy past, with Devil Dog (160 pp., $19.99). U.S. Marine Smedley Darlington Butler (1881-1940) fought bravely against Germans, Chinese, Nicaraguans, and anyone else he was pointed at before writing an exposé entitled “War Is a Racket.” David Talbot chronicles Butler’s shift from self-described “muscle man for Big Business” to supporter (and, by some accounts, savior) of Franklin Roosevelt’s administration, while comix luminary Spain Rodriguez provides flamboyant illustrations to complement archival photographs, period posters, and news clippings.

Amping up tropes from The Stand, The Road Warrior, and other post-apocalyptic jaunts, Jeff Lemire’s ongoing Sweet Tooth (Vertigo, vol. 1, 128 pp., $9.99, vol. 2, 144 pp., $12.99) envisions a ravaged world populated by roving gangs tracking down hybrid human-animal babies in order to determine the cause of a global plague. Gus is a sweet-tempered, doe-eyed tyke with antlers growing from his head; when his religious-fanatic father dies, Gus travels with a former NHL brawler who, in exchange for his dead wife’s corpse, trades the kid to a militia performing experiments on the new breed of children. Lemire’s disheveled line work, somber palette, and angular black silhouettes keep this surprisingly touching story entirely believable.

While set in the here and now, A God Somewhere (Wildstorm, 200 pp., $24.99) climaxes with apocalyptic slaughter, as tales of gods generally do. John Arcudi’s grim narrative of delivery-man Eric Forster’s accidental ascent to omnipotence is bolstered by Peter Snejbjerg’s expressionist violence and overt visual references to such classical compositions as Michelangelo’s Christ the Judge, from the Sistine Chapel. Families, generals, and presidents suffer as Forster’s good intentions are outstripped by the power his ego can’t contain. His dearest friend, wishing that the chain of events leading to widespread carnage had somehow been different, finally despairs, “There is no ‘if.’ There is only ‘is.’ ”