A certain breed of hip-hop obsessive, steeped in Long Island lore and old-school minutiae, was thrilled beyond measure at the news that Son of Bazerk — the Public Enemy/Bomb Squad satellite group whose 1991 hip-hop soul excursion Bazerk, Bazerk, Bazerk remains a forgotten classic — were to reunite this summer and open for Public Enemy at an August Central Park SummerStage gig, the better to promote their comeback album, All Thawed Out. The bad news: They got to do one song.

Now, the do-over: SOB (full name: Son of Bazerk Featuring No Self Control and the Band) are doing a full, headlining set at the Knitting Factory December 23, paired with the Leaders of the New School (minus Busta Rhymes, though he’s always welcome) and augmented by rare spots from Grandaddy I.U., Sugar Bear, and S.I.D. Organized in part by friend-of-SOTC Jesse Serwer (currently working on a book about Long Island hip-hop), the Christmas Eve eve show is a fine chance to reacquaint yourself with the guy with “the greatest voice ever,” as Chuck D had it. Flier below: 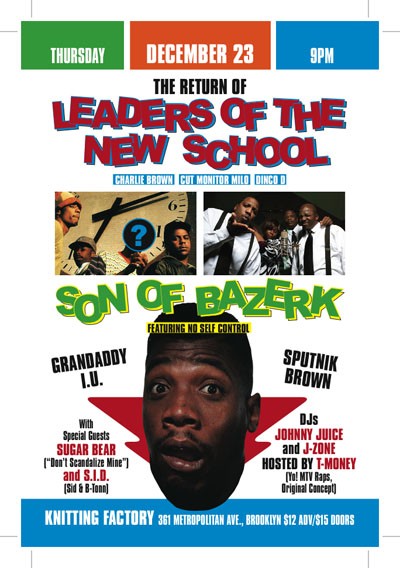