The Caldwell County Courthouse, built in 1892 in the Second Empire style at a cost of $65,000, is the focal point of Lockhart. It was the scene of many gun battles in the late 19th century. Smitty’s Market sits at one corner of the square.

There’s no question that Kreuz Market (pronounced “Krites” by the locals) is the world’s most famous barbecue. Or maybe it’s the world’s two most famous barbecues. I say that because, in 1999, following a disagreement between the son and daughter of Edgar “Smitty” Schmidt–who bought the market from the Kreuz family in 1948–had a falling out, and the original Kreuz split into two. The brother took the name and started a barn-like new place out on the highway that runs to Austin, which is the barbecue called Kreuz Market today. 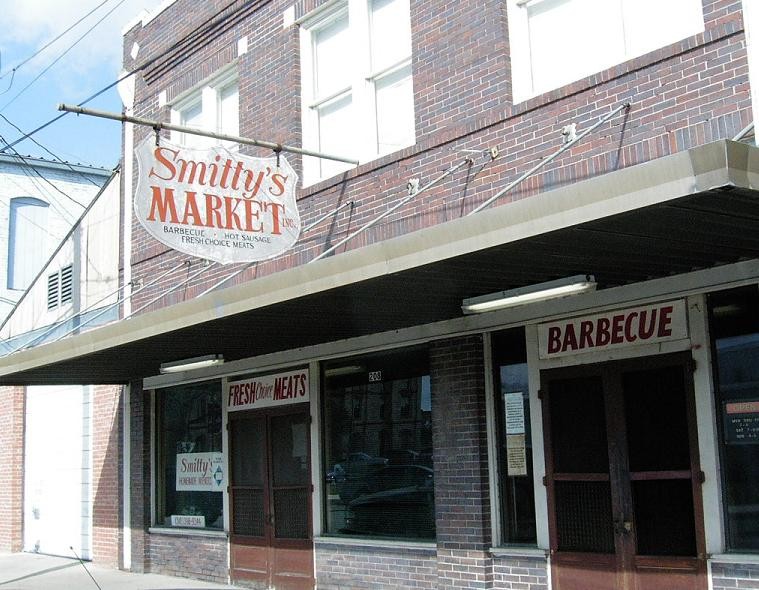 Smitty’s occupies the premises that was Kreuz Market from 1900 to 1999. 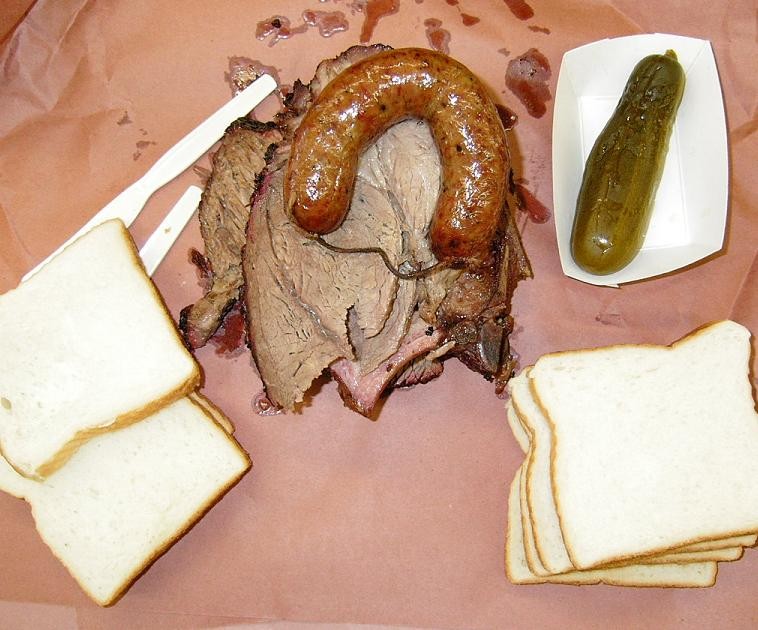 Smitty’s sausage and clod, with their proper accoutrements.

The sister kept the real estate on Lockhart’s famous square, and changed the name to Smitty’s Market. She kept everything else intact: the narrow hallway, fantastically stained with smoke, that leads from the old butcher shop up front to the pits in back, from which fly beef brisket (also known as “rich” because of its fattiness), beef shoulder (known as “clod” or “lean”), plain and jalapeno flavored beef sausages, pork ribs, pork chops, beef ribs, and prime rib. (Most people don’t bother with anything but the brisket, clod, pork ribs, and pork chop, the latter somewhat unique to this area, and not all that different from the German smoked pork chops known as kasseler ripchen.) 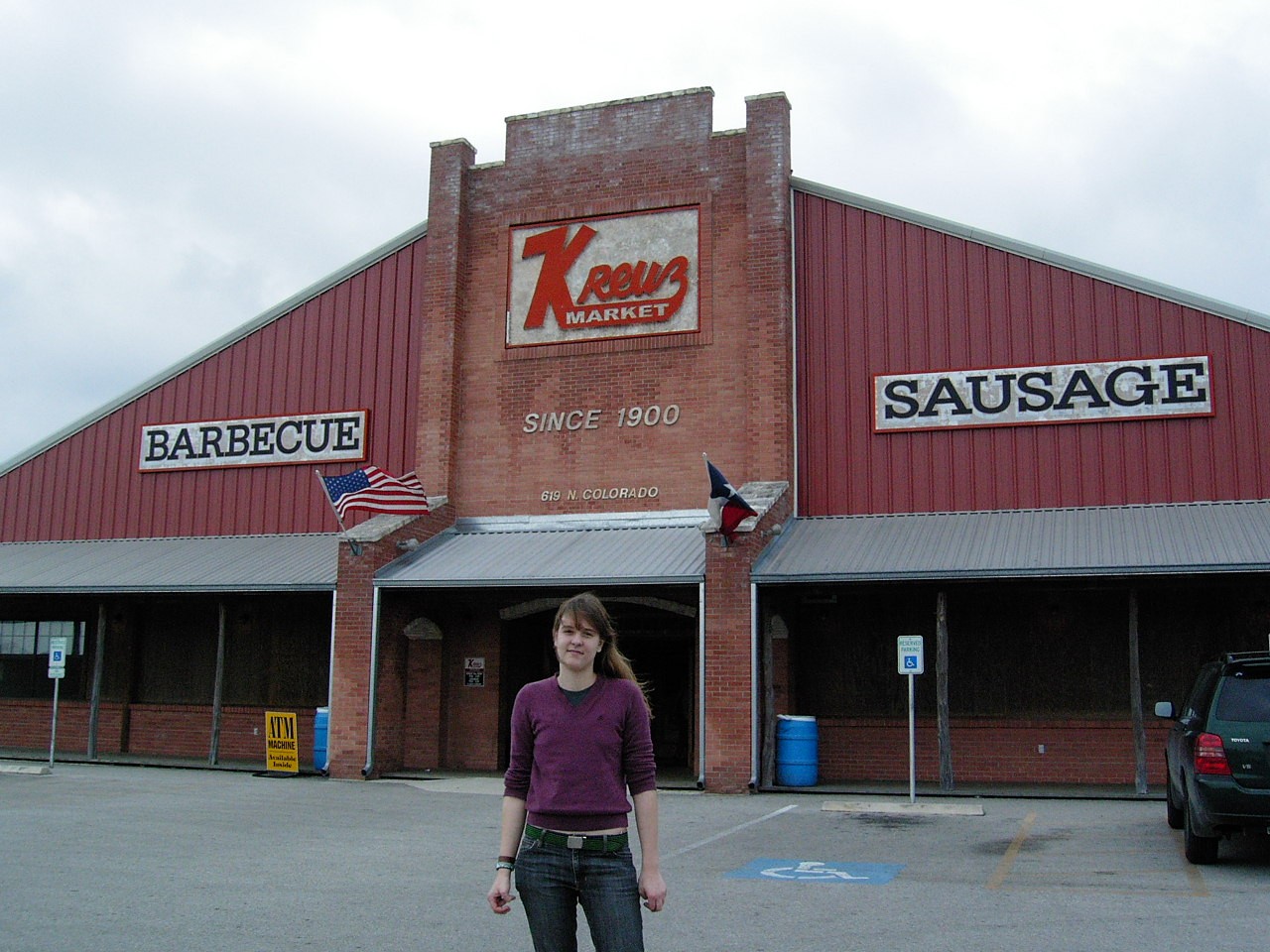 Kreuz moved into this big new space in 1999 or thereabouts. 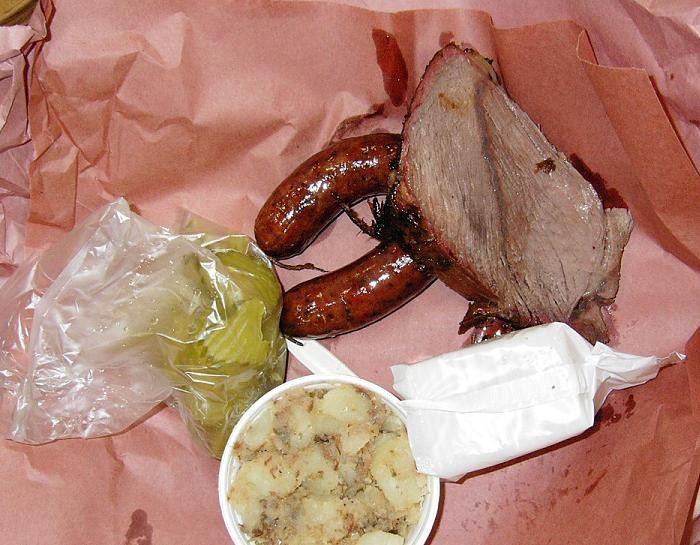 The sausage and clod at Kreuz, where a full pickle costs you, while the pickle chips are free. Your choice of white bread or saltines.

Whether to support the brother or sister is a question that lingers in the air, usually resolved by going both places. Of course, if you go to those two, you also have to stop by Black’s–in operation since 1932, and thought to be one of the oldest continuously operating barbecues with the same owner and the same location in Texas. Black’s is located just off the square and most townsfolk prefer it, probably because the place is a little more flexible about what they serve, barbecuing chickens and such-like, and serving things like banana pudding and jello with little marshmallows in it for dessert. Oh, and there’s still a fourth barbecue in this cotton farming town of 11,000: Chisholm Trail Barbecue, which no one I know has ever set foot inside. You can be the first. I spotted it recently on a run across town looking for a stand that sold pecans.

Next: More pictures of Kreuz, Smitty’s, and Black’s 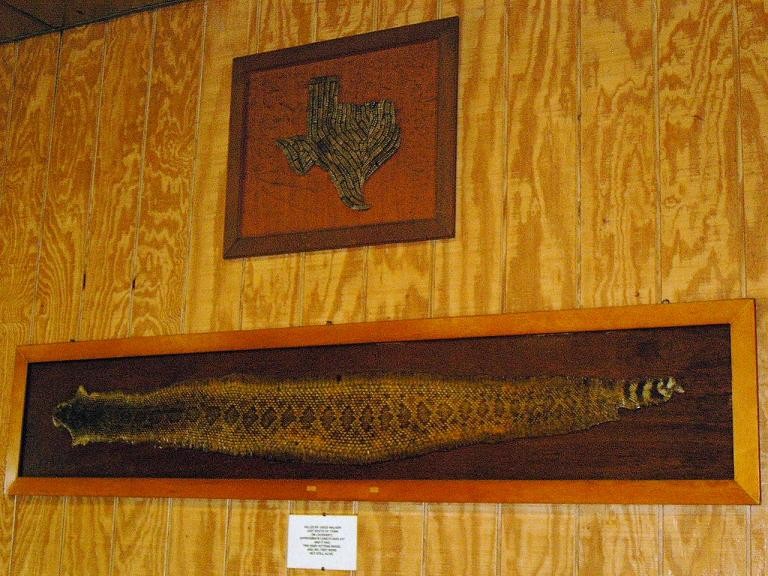 When Kreuz moved out to the highway, they took with them the giant rattlesnake tail and map of Texas made out of rattler rattles. 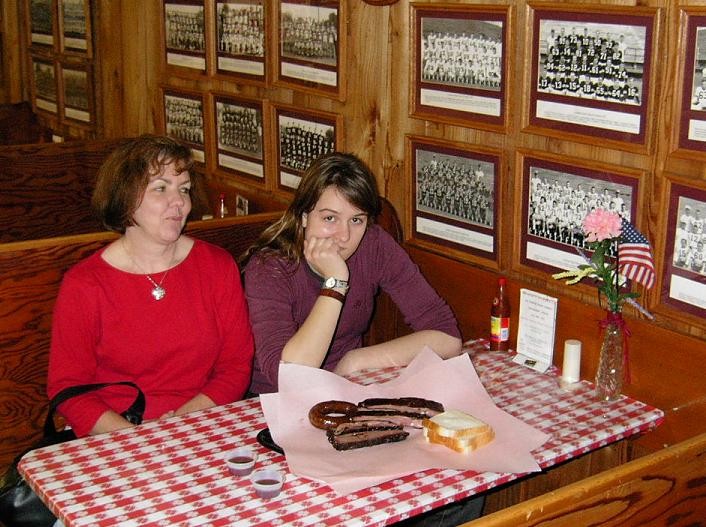 The interior of Black’s is festooned with trophies, team pictures, and other memorabilia that keep the locals coming back. Or is it the banana pudding and jell-o? 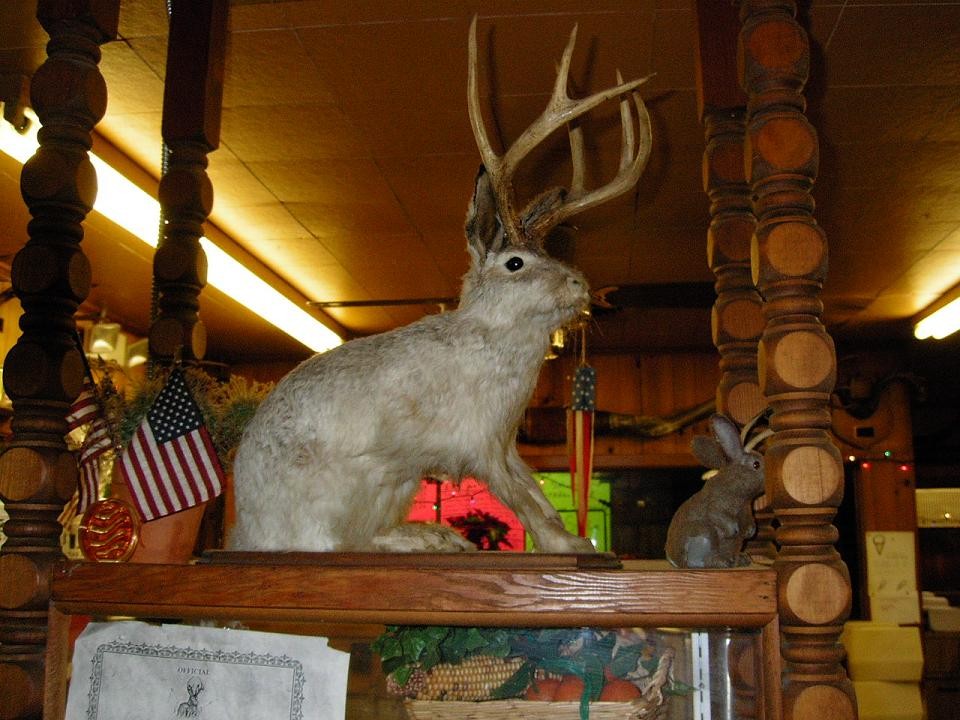 Of course, Black’s has its own jackalope. 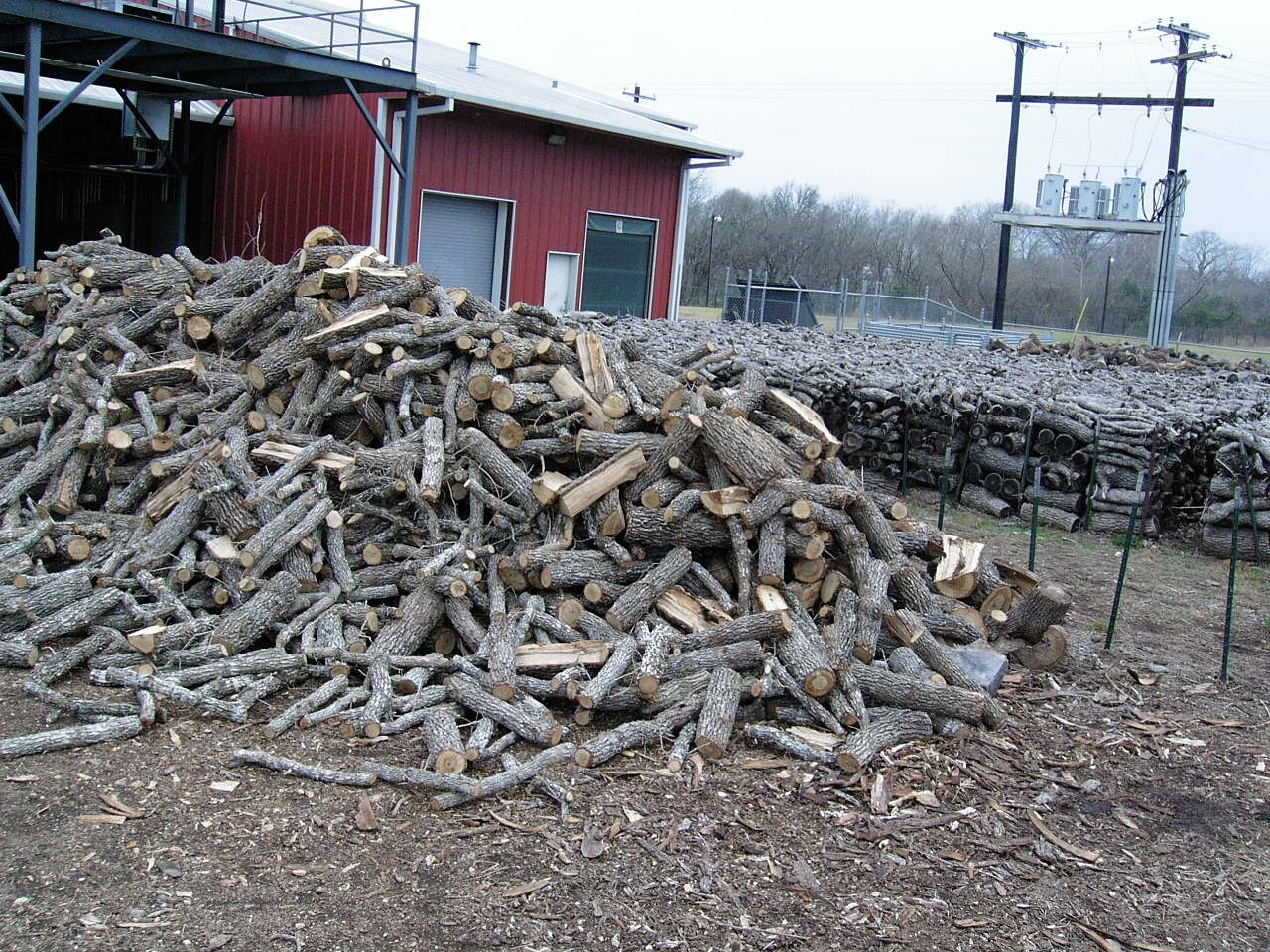 The wood stack at Kreuz means business. Cotton bolls are often caught in the fence surrouding the wood yard, which is filled with oak. 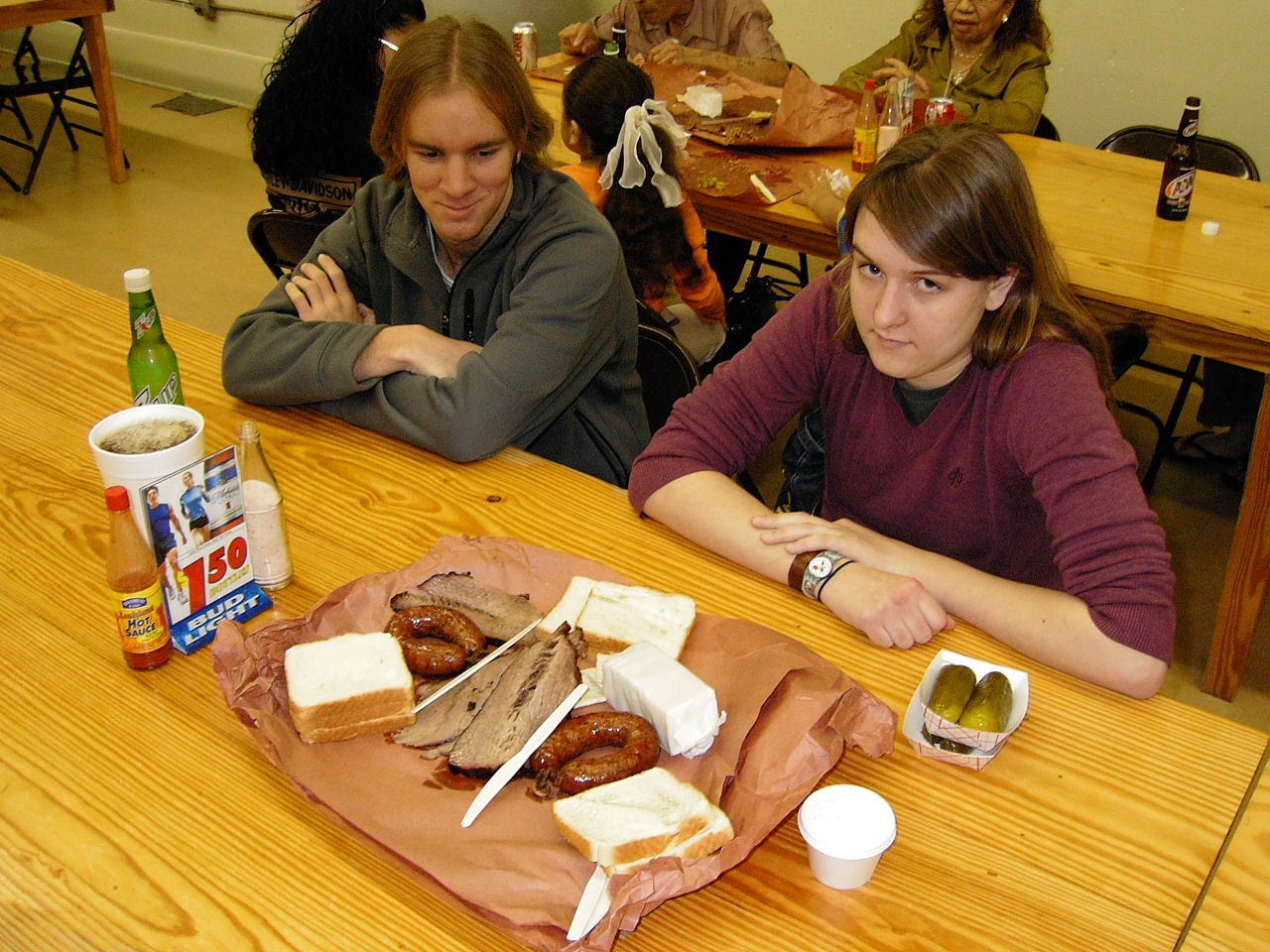 Cousins enjoying the barbecue at Smitty’s, 2003.

Check out the entire series Great Barbecues of Texas