In honor of Michael Jackson, we’re raiding our archives. Here’s Vince Aletti on Jackson’s Thriller in 1982. 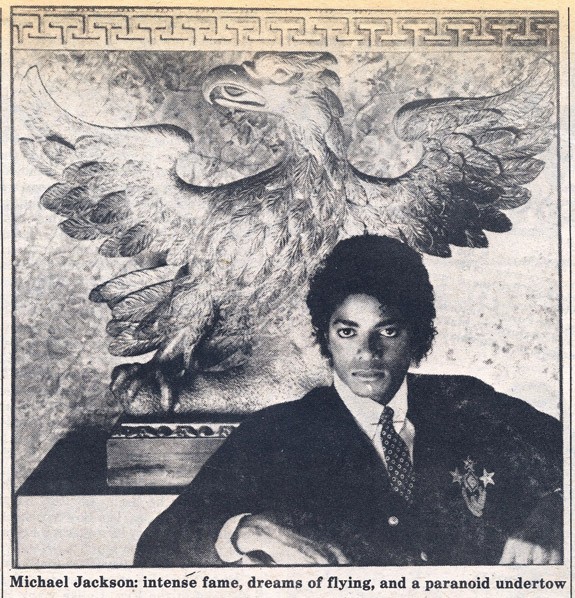 Michael Jackson, who has been “touring, singing, dancing” since the age of five told Interview recently that he had only vague memories of growing up in Gary, Indiana: “little things like the corner store or certain people in the neighborhood. The high school behind us always had a big band with trumpets and trombones and drums coming down the street–I used to love that–like a parade. That’s all I remember.” When Andy Warhol asked him if he ever thought he’d grow up to be a singer, Michael said, “I don’t ever remember not singing, so I never dreamed of singing.” Instead, Michael says in this month’s Ebony, he dreamed of flying, “and I still dream about it all the time.” Not flying in a plane, of course, but flying like Superman or, more to the point, like E.T., who holds Jackson in a creaturely embrace on Ebony’s cover. This tantalizing dream is one of the reasons Michael agreed to narrate the E.T. “storybook album,” he says–that and his feeling that E.T.’s “story is the story of my life in many ways.” Not many profound ways, it turns out. But he seems to be getting at something when, at the top of his list, he puts being in a “strange place” and wanting to be “accepted.”

Maybe this remark is just another bit of showbiz chat, but if Michael Jackson really sees himself as a stranger in a strange land, I suspect it’s only because he’s both running away from and constantly reinventing “home.” His past is not Gary, Indiana, faded now to a few storybook images–the corner store, the parade–but the cool march of song titles, chart positions, and awards across the pages of his record company bio. Intensely famous since the age of 11, Michael, now 24, grew up like a forced plant in the hothouse of celebrity, at once overprotected and overexposed. He emerged with a bruised, hard-won innocence–part artifice, part armor, part dreamy escapism. No wonder he aches to fly. It’s hard to tell how much of Michael’s vulnerability and naiveté is genuine and how much a mask; clearly there’s a savvy toughness just below this tender surface and a ferocious drive for accomplishment that is almost second nature. Still, the real person is especially elusive here. Questioned by Interview on his impulse to “act a lot in everyday life,” Michael says, “It’s escape. It’s fun,” and suggests that it’s not acting when “you really believe it,” it’s almost a matter of faith. What he loves to do, he says, is “totally forget” and become another person. Will the real Michael Jackson please stand up? Of course, one wonders just what Interview and Michael know about “everyday life;” perhaps more than they care to. But pop society–particularly the rarefied sort that Jackson has traveled in for the past few years–provides the perfect atmosphere in which to “totally forget.” Two phrases cropped up repeatedly in Michael’s Interview interview: “It’s magic,” and “It’s unreal,” he kept saying. He wasn’t talking about what it’s like to be Michael Jackson, but he might as well have been.

He might also have been describing his new album, Thriller, as stunning and satisfying a piece of showbiz escapism as anyone has turned out in years. Don’t get me wrong–this is no retreat to spunsugar sentiment and jerky romance. Michael’s escapism is more aggressive and muscular, even in the ballads–he’s closer to Speilberg than Disney, calculated and relentlessly refined but driven by a brilliant obsessiveness. There’s something so warm, so generous about Michael’s compulsion to entertain here; it’s passionate, pushed to the limit, wonderfully seductive, even at its most showoffy. (This impulse is not quite so convincing on the E.T. album, where Jackson is frighteningly hammy on the narrative and a touch too tremulous on the song.) In the absence of personal revelation and soul-searching, Michael’s giving-it-all intensity is the emotional core of Thriller, but it burns so brightly you never feel deprived.

For those who want to dig deeper, there’s a decidedly paranoid undertow to three of Jackson’s songs (“Beat It,” “Billie Jean,” and “Wanna Be Startin’ Somethin'”–all his own compositions) that gives the album an unexpected tension, a provocative hint of darkness below the glittering surface. The darkest, “Beat It,” is a deliciously ominous funkrocker that features a screaming guitar solo by Eddie Van Halen and deep, echoing bass. In a series of tight, clipped verses, Michael tries to convince someone (himself?) to walk away from a fight–“just beat it”–instead of trying to be bad. “Don’t wanna see no blood,” Jackson sings, but the music promises mayhem and even the frantic repetition of Michael’s advice seems to make the clash more inevitable, maybe secretly desired. “Billie Jean,” which follows, shares some of this tension with its brittle, anxious delivery and jumpy pace. Defending himself in a paternity suit, Michael compresses anger and hurt into his singing, then fills the track with furious violin exclamations, chattering guitar, the steady whisper of a hi-hat, and a complex welter of backing voices: a gorgeous paranoid landscape.

Without totally abandoning the jittery, taut atmosphere of these songs, Jackson eases up and floods his fearful landscape with light in “Wanna Be Startin’ Somethin’,” the album’s steamiest dance cut. But if the track is almost celebratory in its exuberance, the lyrics–a suggestive tumble of lines that both hit and miss–bring that nagging undercurrent of anxiety to the surface again. The subject is gossip–“talkin’, squealin’, lyin'”–with Michael and his “baby” caught in the razor-tongued crossfire, “stuck in the middle/and the pain is thunder.” Michael realizes he’s a “vegetable,” a whole “buffet,” to be devoured at will by a voracious public, but there’s little trace of bitterness in his singing here, and he bites into each line with a yelping zest. In the end, paranoia is dispelled and sent spinning in a suddenly anthemic final verse. “I know I am someone/And let the truth unfurl/No one can hurt you now,” Michael sings before the song slips into an inspired non sequitur of joyous chanting copped–smart move–from “Soul Makossa:” the spirit triumphant.

The rest of Thriller feeds off and plays off the wired heat of these cuts–the creamy love songs (“Baby Be Mine,” “The Lady in My Life”); a chugging soft-core funk number (“P.Y.T. [Pretty Young Thing]”); a hushed, delicately shaded gem called “Human Nature;” even the insinuating showbiz pop of “The Girl Is Mine,” just-us-superstars smarminess and all. After “Beat It,” “Billie Jean,” and “Startin’ Somethin'”–the three cuts on which Jackson shares production with Quincy Jones–these other songs are thrown into high relief, radiant, flawlessly polished, considerably more splendid by contrast. Only Rod Temperton’s title cut returns to the theme of paranoia, this time seen through a funhouse mirror, exaggerated and spoofed with a chilling list of horrific images that turn out to be safely confined to a TV screen. “Thriller” provides the bridge between the album’s dark and light tracks, striking a neat, witty balance. Jackson clearly enjoys this juicy entertainment, and Jones gets to toss subtlety–but not style–aside with a scattering of cliché horror sound effects in the dense, loping track and a marvelously silly Vincent Price rap at the end.

Jackson and Jones combine so easily on Thriller that the material, no matter how elaborately constructed, feels un-pressured, effortless. There’s a harmony to this collaboration that blurs the distinction between producer and produced, allowing for something richer, more assured, and infinitely more relaxed than is usual in these high-powered talent meets. Here, Quincy gracefully opens the door and the real Michael Jackson steps through: Mr. Entertainment. Obviously, Michael’s been honing his art along with his ambition and the result is remarkably sharp, intensely focused–not quite second nature, but getting there. On Thriller, as on the earlier Jacksons song “Heartbreak Hotel,” Michael’s begun to part the shimmering curtain of his innocence–(it’s magic, it’s unreal)–to glimpse darker, deeper things. Once that curtain is ripped down, the view could be astonishing.