“I’m a really big fan of Sonic Youth, and I kind of don’t make any bones about it.” 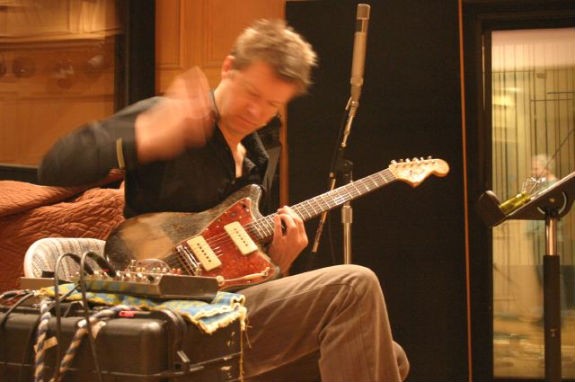 Jeff Tweedy pulled a rabbit out of his beard when he landed Nels Cline in Wilco following Yankee Hotel Foxtrot. Screwing with that album’s winning formula by introducing an off-the-wall competing guitarist on its follow-up, A Ghost is Born for the tour in support of Foxtrot’s follow-up, A Ghost is Born, was arguably idiotic but no doubt genius. Cline, an L.A. born-and-bred guitarist of infinite variations, proceeded to spew his electric load all over live renditions of Ghost songs, in effect challenging Tweedy to jerk off with his own guitar-playing, which suddenly was possessed by Neil Young circa the album Everybody Knows This is Nowhere. By accident or by design, Tweedy had, in Cline, installed a permanent challenge to his already “A” game.

Throughout his five-year run with Wilco, Cline has additionally released more than a dozen albums of his own, in various configurations. His latest, Coward, is an elegant, meditative, “me, me, me”–as in he plays all the guitars and all the effects–project that was 25 years in the making. I caught up with the 53-year-old guitarist in advance of his solo show at the Stone this Sunday, wherein he will mostly forgo the multi-layered songs on Coward in favor of his “usual, semi-premeditated sonic investigations.” Our topics of discussion: masturbation; how he and his twin brother, a drummer, were influenced by the ’60s; and why an eccentric like him is still attracted to a mainstream band like Wilco.

I have one of your old records, Ash and Tabula, and, you know, it’s pretty aggro. But Coward sounds a little like John Fahey–more casual. What gives?

The record that you mentioned with Tom Rainey and Andrea Parkins [Ash and Tabula]–like, some of the records I put out are completely improvised. The records with my trio, the Nels Cline Singers, and with myself, in this case Coward, are not only improvised records but records that reflect my compositional interests. Coward is a particularly unique project, not just because it’s an overdub project, but also because it’s not a collaboration with anybody. I just indulged all my fascinations with microtonality and overtones–that’s what’s going on there.

So the new songs are compositions, not improvisations?

There’s a combination of both things on the record. For example, certain songs, like “Prayer Wheel” or “The Divine Homegirl” or “The Nomad’s Home”–some of them are songs, with melodies and chord changes and rhythms. Other pieces, like “X Change(s),” are kinds of experiments in basically improvising with myself and string instruments. Obviously, if I did something as I was improvising on this record that I didn’t like, then I could hear it. So there’s a certain amount of preconception that’s inherent in just giving it another try. But I tried not to hack away at it over and over again and lose its spontaneity.

Do you play to impress sophisticated listeners, or do you play to educate a curious listener, maybe like a Wilco fan who wants to learn more about some of this avant type of music?

I don’t do either one. I play what I like to play. I mean, I’ve never sold many records so it’s not like I’ve been thinking about sales. I just make something that I think my friend Jeff Gauthier, whose label I’ve been recording on, and my friends would probably enjoy, and say, “Hey, good job, Nels.”

Do you have a pet bird?

I hear a bird chirping.

Are you playing an acoustic on the album, or is that a steel guitar?

There’s all kinds of stuff. But it’s a mostly acoustic record.

Would you say that acoustic is a departure for you?

No, I think that’s just probably perception, because there was a time when nobody had any awareness of me, when I played mostly acoustic guitar, but that was in the ’80s. The electric guitar certainly has been my main thing, in the public eye, especially. I’m interested, obviously, in the possibilities of that instrument because it’s so malleable … so all the stuff people concentrate on, about my pedals and all that, come into play and they’re really not an attempt at novelty so much as just, you know, enjoying the potential the guitar has to go in many different directions, different sounds, different aesthetics. That’s why I think I can play in Wilco and then play in improvised-music settings, whether avant-garde or not.

Tell me about the “Onan (Suite).” Is that a song cycle about a great masturbator?

Yeah, pretty much. I mean, it’s just, uh … I don’t know how … I can’t really describe it too much … . Let’s just say it’s semi-serious. I’m kind of taking the piss out of myself–as a guitar, you know, whiz, or something–by saying on this whole record that I’m playing with myself. So there’s an element of humor to it. But at the same time it’s actually trying to address a certain idea about eroticism and about abstraction in sound. It doesn’t really need a lot of elucidation. That piece is supposed to be just a fun, trippy thing to traipse through. 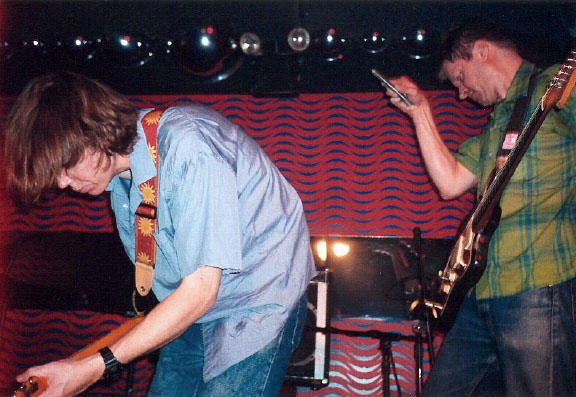 So, “Thurston County,” doesn’t it kick into a Sonic Youth song from Daydream Nation?

Are you guys buddies?

Yeah, yeah. Thurston and I have put some records out where we play together. But I’m a really big fan of Sonic Youth, and I kind of don’t make any bones about it. I’ve pretty much made it clear for years that a lot of ideas that I have about sound were refined in my head by my exposure to Sonic Youth. They’re very influential to me, and I cherish them. So basically, when I came up with “Thurston Country,” it was after I thought I’d finished the record, and I was listening to the whole thing, and it just felt a little bit too slow, so I basically wrote and recorded and mixed that song in one evening, kind of as a last-minute effort, and decided not to worry about the direct Thurstonian aspect of it and just kind of send it his way, as a nod to him.

I was reading on your website about your twin, Alex, and I thought that was cool that you guys were releasing your albums at the same time. Why don’t you guys play together more often?

He’s doesn’t like to tour. I’m always gone. But we used to do everything together. We played at our elementary school graduation, with our band Homogenized Goo.

How do kids that young think of Homogenized Goo for a name?

It was the ’60s. This was before Traffic had that song “Medicated Goo” even. We were listening to rock-and-roll and psychedelic music, and looking at pop art and surrealist and dada art, and just getting into that, getting into absurdity, and getting into … you know, the whole vibe of the day was kind of all about fun, mind-expanding stuff. It was a great time to be entering puberty. A little confusing maybe, but great, really exciting. In my music, I think the electricity and the freedom and the curiosity of that era still resonates with me.

You express such interest in wide-ranging influences and liking to collaborate with so many different people. Meanwhile, it would seem that Wilco is becoming an increasingly mainstream band. What about that band still attracts you to it?

I don’t see the band as becoming increasingly mainstream, for one thing, if you listen to their early records. What’s attractive to me about Wilco is–well, there are so many things–we don’t have to do anything we don’t wanna do. There’s no pressure to play the hit over and over. There’s no pressure to be anything other than whatever the hell we feel like being. Beyond that, I have to say, without sounding like some kind of Hallmark Greeting Card guy, or something, that the people in the band are fantastic musicians and great people.

What can you tell me about the new Wilco album?

It’s kind of all over the place. It’s got some stompin’ rockers and it’s got some really poignant, quiet songs–more folk-country kind of stuff. There are some really colorful, orchestrated–the band orchestrated, I mean, not like an orchestra–pieces that I think show a lot more of the flexibility and the potential of this band. One of the pieces on there is actually just a mixed version of a demo that we did when we barely knew the song. Jeff [Tweedy] really liked the way it felt, and so he just finished the lyrics and redid the vocal.

You got a song title?

“Bull Black Nova.” It’s pretty ripping. But there’s some very, very beautiful, lulling, kind of gentle material also. And then as far as the lyric content, there is an overarching, I think, sensibility or theme, but I’m gonna leave you to discover what that is.

Nels Cline plays this Sunday, May 10 at the Stone on Avenue C at East 2nd Street.