Aziz Ansari performs at Comix on January 9 and 10. 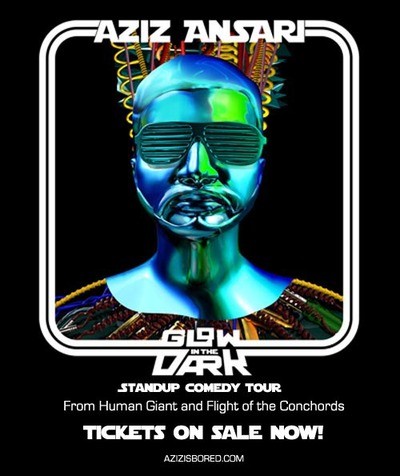 Comedian Aziz Ansari studied marketing at NYU and came up through the city’s underground comedy scene before earning his break as co-creator and co-star of MTV sketch show Human Giant. He’s now departed for L.A., and is starring alongside Amy Poehler in an upcoming NBC sit-com from The Office executive producer Greg Daniels. Ansari is featured in the upcoming Judd Apatow flick Funny People, the new season of Scrubs, and about a million other projects. He spoke with Sound of the City through his preferred medium of email.–Ben Westhoff

Human Giant is indefinitely “on hiatus,” and you’ve said that’s because though MTV wants you to do a third season you’re too busy because of your NBC show. Is that the real story?

The truth is Sway forced us off the network. Last year at the MTV Christmas Party, all the network talent took part in a “Secret Santa.” Before the gifts were handed out, I was in the bathroom and heard Sway bragging to a friend about how he stiffed his secret Santa and didn’t buy them a gift.

Later that evening, after gifts were handed out and Xzibit didn’t get one. He was really bummed and took it personal. No one would fess up to not buying the gift and I finally blurted, “It was Sway. He’s the asshole who didn’t get Xzibit his secret Santa.” Needless to say, Xzibit and I then beat the shit out of him.

The next day, I was told to pack my things and leave MTV. Sway saw me on my way out and said “Don’t ever fuck with the Sway.”

Diddy’s “Diddy Blogs” are hard to beat. If you’re unfamiliar, here’s a good example – in Diddy Blog #8, he heralded the movie Hancock for giving the world its first African American superhero. It was a tough issue for Diddy. He said as a child he saw that even dogs had their own superhero (Underdog) before African Americans, and Hancock had finally put an end to the injustice. Thus far, there has been no response from Blade, the Black Power Ranger, or Bishop from the X-Men among others.

Are you pissed at Amy Poehler for getting pregnant and delaying the start of your sit-com, since now it won’t debut until after the Super Bowl?

Yeah, thanks Amy, hope having a “child” was worth losing millions of viewers for our premiere!!

You’re in Judd Apatow’s up-coming film Funny People, and so is RZA. Did you get to spend any time with him?

RZA and I don’t have any scenes together but he was on set to see some of my stuff and said he thought it was funny. I was pretty flattered, because RZA is the man. He was very nice.

There are rumors of a potential Human Giant movie, although you’ve said you won’t speak on the plot. But tell me this — if you could have the obscure Hollywood actors of your choice in the film, what would their roles be?

You recently detailed a wild night on the town with Paul Krugman, during which women were falling at his feet. Have you spent any time recently with any other unlikely celebrities?

I got into a fight with Tom Colicchio from Top Chef last weekend in Austin. He was in town for some event for Food & Wine magazine and we had both ended up at the same bar after our respective events. I was talking to this girl and at one point Colicchio comes over and goes “Hey bro, why don’t you pack your knives and get the fuck out of here?” I said, “Excuse me?” He goes, “Look bro, I’m on Bravo, I do what I want and I want to talk to this chick and I want you to pack your knives and go.” I refused and next thing you know Colicchio throws a handful of coriander in my eyes and slams my head into a bowl of foie gras. I tried to fight back but Colicchio grabbed my throat and goes, “If you don’t go away, I’ll replace your eyeballs with these grilled bacon wrapped scallops.” Security eventually detained him and I went on with my night.

What are your New Year’s resolutions?

1) Quit counterfeiting Quiznos’ rewards cards and selling them for $3

By my estimate, I’ve given away over 6000 toasted subs to customers who did not eat the required 7 other toasted subs to deserve them. I apologize to everyone at Quiznos and promise this will end in ’09.

2) Erase some of the stuff off my DVR

Girl at my apt: Hey you want to watch some TV?
Me: Yeah, I have over 4 hours of Fox’s X-Men animated series on my DVR!
Girl at my apt: WHOA! Do you have the “Savage Land” episodes? Or any of the episodes with the time travel story arcs with Bishop and Cable?
Me: Fuck yeah, I do. I got all dem shits.
Girl at my apt: Let’s make out and watch it!!

This does not ever happen.

Before I fully moved to L.A., I had to rent cars and consistently ended up with bright neon colored PT Cruisers. I grew to hate them and now every time I see a PT Cruiser, I take a huge dump on it. I realize this is foolish and unnecessary and in ’09, I will just piss on them.