“It was an insane time, we would stay up for days at a time and smoke George Burns cigars and listen to Henny Youngman standup routines and watch W.C. Fields movies and write jokes, homemade jokes, jokes with missing punchlines. Those were really good times.” 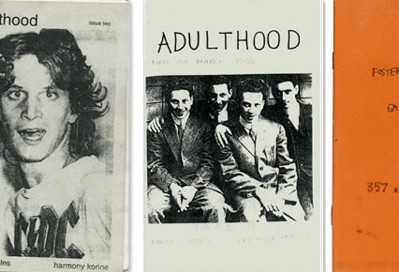 By the age of 22, Harmony Korine had written the screenplay to Kids and was notorious the world over. He’s 35 now, and the artist/filmmaker’s bulging rap sheet of books, films, and artworks continues to inspire, disgust, and elude in equal measure. The Collected Fanzines, released today, compiles eight long-gone booklets from 1992 to 1999, a period that spanned Korine’s graduation from high school, Kids, and his first two features, Gummo and Julien Donkey-Boy. Scraps of thoughts strung together–impressionistic jokes, story fragments, Hollywood apocrypha, and lists–offer unaltered evidence of the artist’s creative process through his 20s. We spoke on the phone as Korine took a morning dog-walk in a Nashville field dotted with old folks combing for Civil War artifacts with metal detectors. “If there was anything here you’d think they’d have found it years ago,” he said, perplexed but unjudgmental.–William Pym

I hear there are dramatic times at your end.

Because my wife’s about to have a baby? Yeah, it could happen at any time. Waiting for it to drop. It’s pretty crazy.

There’s a little bit of commentary in your new The Collected Fanzines: A sentence or two describing where you were at when you made each one. Were you looking at the zines now for the first time in a long time when you were putting this together?

To be honest, it took six or seven years to get these things, because I didn’t have any. Five years ago, we’d put together a set, and most of the initial runs were so small, like a hundred copies max, so it was difficult ten years later to find people who still had them. I finally did, and somehow they were lost on the way to the printer in Italy–this was years ago. It took another four, five years to find new sets, scan them and turn them into a book. I hadn’t looked at these in a really long time. You’d see them popping up on eBay and things and people selling them. That was never the intention. I thought it would be nice to put them all together.

It’s a narrative of an entire decade of your life in these zines. Was it weird to revisit what’s in there?

I didn’t think about it at all. I didn’t let it disturb me: Let’s put it that way. Most of the memories that are attached to making them are good memories, fun memories. I had a great time with [skateboarder/writer] Mark Gonzales making some of them, it was an insane time, we would stay up for days at a time and smoke George Burns cigars and listen to Henny Youngman standup routines and watch W.C. Fields movies and write jokes, homemade jokes, jokes with missing punchlines. Those were really good times. And we would just go out on the street–there used to be these hunchbacks, this hunchback family who lived on my street and we would give them to them, distribute them, go to Kinko’s, sell them to galleries. There are ones in there that maybe reflect a darker period, more bleak, but for the most part these were done in good humor.

Did you put a lot of thought into who was gonna get them or how they were gonna be received?

I was making films, and the film business, the film industry, that business. There’s such a wall, it’s such a game and it takes a lot of time, and you involve a lot of people. It can be frustrating. Making these things there was almost no thought in any of it as far as who gets it, where, how many are made. I remember the spirit of making things, making up a language almost, and giving them to friends and family and forgetting about them. The immediacy of the whole thing was attractive and the collage aesthetic was attractive. Sometimes it’s nice to not have to think about things too much, how things have to sell or where they fit in, or what the reaction is going to be. It was about playing around. You just wanted to make people laugh.

There’s a few characters that you go back to from zine to zine.

I always loved Harrison Ford, I can’t explain it. I thought he was a great movie star, what an American movie star was supposed to be. I loved him in Blade Runner, but especially in Mosquito Coast. I loved someone who could do Indiana Jones and then do a film like Mosquito Coast. He just always seemed like a truly unique American celebrity. He seemed to pop up in the zines the same way that Clint Eastwood would.

What about Willie D?

[cracking up] I guess in my mind I just kept thinking about how funny it would be to hear Willie D say those things. I love the Geto Boys and Willie D’s voice, he almost sounds like a Black Moses.

You give him all the best lines. “Grace Jones likes to bone.”

You think of a line like that and imagine Willie D saying it, and somehow it becomes one of the funniest jokes in the world. [Imitates Willie D, pretty well] “Grace Jones likes to Bohhne”, you can hear him singing it, that being one of his lyrics.

Are you going to do some readings for this book?

We were talking, Mark and I, about reading some of the name poems at a Kentucky Fried Chicken.

Is it gonna work out?

We’re trying to figure it out, reading the pages of the zine or a new book of name poems in an active Kentucky Fried Chicken. It was an idea Mark came up with and I think it’s a really good idea. People can order their chicken.

Do you eat Kentucky Fried Chicken?

I have eaten it before. It’s not anything I go to a lot nowadays. I don’t mind it. I thought it would be good to sell a book with a chicken wing. You know, tape a chicken wing to the cover, sign the biscuits.

My favorite page was the page with two lists on it. “Five items he became obsessed with”. I saw them as being nakedly autobiographical. Were you surrounded at the time by a movie reference book, gum, television, a Vanessa Del Rio video and a picture of your little brother?

Yeah of course. Those are all things that were there at the time. This was before the culture of internet lists. I was really obsessed with joke books, list books and things like that, the way they were written. Obsessed with taking interviews and changing the name of the interviewer. Take an interview with Old Dirty Bastard and switch the name, change it to Jane Fonda. It becomes something so much greater. That was something I liked to do. I would take hours imagining, reading interviews and imagining someone else saying the words. In some ways I saw that as the future of comedy. It’s difficult to articulate that, it could almost only exist in a dream or a thought. It was so abstract it was almost singular, just in your mind, you had to invent it, but it was the funniest thing in the world. I wonder if there’s a way to do that in a standup.

I’d feel strange about doing that for some reason. I don’t know if I could do that, if I have the commitment. I guess you could memorize someone’s routine, let’s say you memorize a Richard Pryor routine but you went and you dressed up and did the whole thing as Colonel Sanders. You did it exactly the same, all the same nuances and style of delivery but had the best Colonel Sanders prosthesis. It could be so great.

You do it in Richard Pryor’s voice, with all the same cadences and rhythms, you’d literally memorize the standup from beginning to end, but you’d just look like Colonel Sanders.

In a dream nothing could be more straightforward.

We could make it happen.

How are you feeling about fatherhood? It’s something I’d like to do myself.

Oh shoot, are you shooting blanks?

No no, just more trying to arrange my life in a way to make that feasible.

Exactly, these are shining examples. Everything just works itself out.

At first it depends a lot on whether you can function with not much sleep, I hear.

I spoke to God and we ordered up a sleepy child. In fact that’s one of the things I was trying to convince my wife, that we should call our kid Sleepy, because I like Sleepy John Estes, but she thought it would be more associated with one of the dwarves.

It’s very authoritative this book, the presentation and the spine and everything, sort of like a reference book. Do you think about the best way it would be received?

I would be really happy, I doubt it’ll be part of a public school curriculum, but I would be over the moon if it was something like a New Age children’s novel, something that children read, getting a young person at an impressionable age. Even, I think, disabled children could respond well to this, or people in prison.

I guess we lost the call.

No problem. What was that last bit?

I thought you hung up on me.

You should just end the article like that, with me hanging up on you. I think that was a good interview.