POP Montreal: Things We Love About This City

What makes Montreal worth a long weekend—or a visa application, if a McCain/Palin nightmare comes true? Here’re a few of our favorite things.

*Giant chess boards in Place Emilie-Gamelin. Sure, the park itself, a la Tompkins Square, is a squatter’s haven for squeegee punks and those that love them. But who can’t enjoy watching grown men locked in intense concentration while maneuvering a 2-foot tall plastic pawn?

*Casa del Popolo (or just “Casa,” pronounced without any sort of Spanish inflection, per the Anglophone hipster community.) Live shows and cheap food in the heart of the Mile End district. Think of it as Montreal’s answer to the indie rock meat market of Union Pool—just a bit mellowier, and a whole lot less desperate. 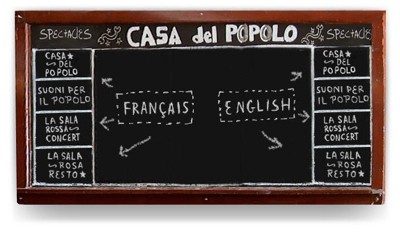 *Breakfast at Le Crossanterie Figaro. The affordable “le brunch” proves that meaty crepes, assorted fruit and an undefined egg-croissant thingamajig are the closest you’ll ever come to culinary nirvana before 11am. It’s also refined and elegantly French in a way that makes you forget mixing ham, cheese and maple syrup together isn’t a recipe for longevity.

*St. Laurent. In the summer months, when Montreal is overtaken by spasms of festivals—electronic music, film, comedy, you name it—St. Laurent transforms into a Parisian-style thoroughfare, with outdoor dining patios, chic lounges, cafes, bookstores, and notable fashion boutiques all vying for your Canadian bucks.

*Bucky’s dome. Thought we were lucky to get the Whitney retrospective this year? Montreal residents enjoy Fuller’s geodesic dome all year round, built in ’67 for the World Fair.

*The illusion of European romance and sophistication without the mess of actually having to speak a foreign language to survive.

*Cheapskates. Even in this A.A.F. (After Arcade Fire) era, you can still score a room in the posh Outremont neighborhood for around $400-$500 American dollars. If you look hard enough, you’ll get Bushwick prices with a Park Slope vibe (and far fewer babies.)