You know when you go to a memorial service for someone and they have pictures of him or her through the years? I’m pretty sure that at mine, there will just be a big collage of plates of food, since that’s all the evidence that exists of me. I just returned from a week in Austin and New Orleans, and I’m fat now. Forgive me if I can only blog about salad for a few days. But first, a look back at how I became obese in 5 days. 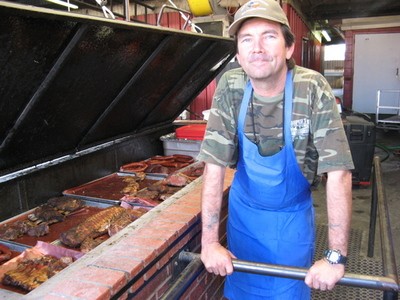 I may have to marry this pitmaster, who tends to the beef ribs, brisket, sausages, pork ribs, and giant pork chops at Cooper’s, in Llano, Texas. We drove an hour and a half from Austin for this meal (a Sietsema recommendation), and I would be willing to go to much greater lengths. Folks, I never truly understood barbecue until that first bite, but now I’m a believer. 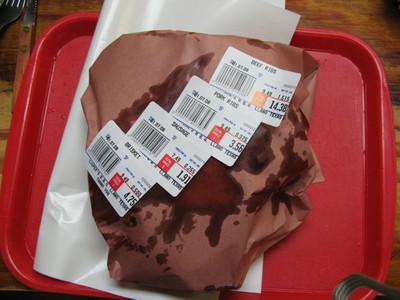 We are ladies who know how to lunch. 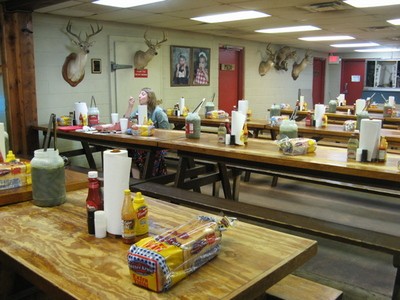 Each place-setting includes a roll of paper towels and a loaf of white bread. A little brisket and some vinegar-intensive barbecue sauce in a piece of white bread is perfection, but the beef rib, with its salty, fatty exterior, probably wins the prize for the best thing I consumed on this trip. And I consumed an alarming quantity of deliciousness. The blond is my traveling companion, who kindly traded in museums for eateries. 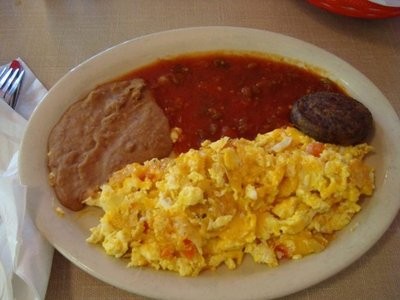 Behold the migas at Cisco’s, in Austin. That’s scrambled eggs with tortilla chips, cheese, tomatoes, and a lot of salsa on the side. (Runner up for best breakfast was La Reyna, where we loved the divorciados, two fried eggs—one with ranchero sauce and the other with tomatillo sauce, plus delicious potatoes, and warm tortillas to scoop everything up. 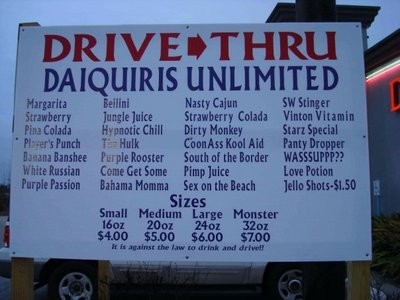 On the road from Austin to Louisiana, things got scary. 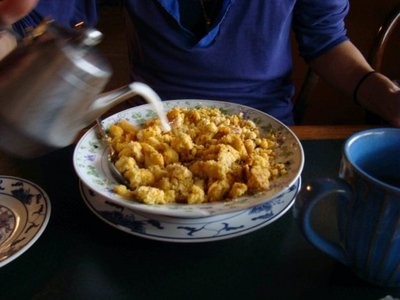 In a town called Breaux Bridges, about two hours west of New Orleans, we sampled the choux choux at a cafe called Jacqueline’s. It’s a strangely appealing breakfast of cornmeal that has been cooked in a cast-iron skillet and rendered lumpy and partially burned. 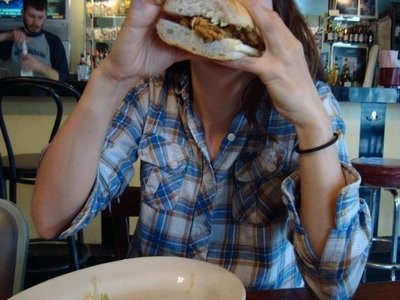 A fried oyster po’boy at Liuzza’s, in New Orleans. And behind the sandwich, yours truly. 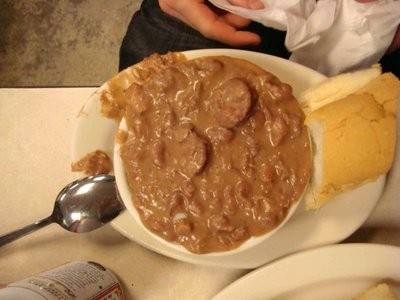 Red beans and rice, with some sausage of course, is a local comfort-food obsession in New Orleans. These are at Mother’s, where the food is good, but it’s more about the bossy waitresses and the old-school setting.