Last Wednesday, also known as Thanksgiving Eve, when we were out with a friend who believes this to be the greatest drinking night of the year, episode two of Project Runway happened.

We finally caught up, and guess what? It turned out to be the episode of inappropriate weeping. We’re so down for that. First, the fat guy cried because Sarah Jessica Parker showed up. He moved to New York because of Sex and the City. Oh God.

Then Wilmer Valderrama cried hysterically during what seemed to be one interview, but they kept showing it, giving the impression that he cries every time they talk to him. Bravo!

Then, on the runway, Carmen (like the opera?) produced an astonishing ugly cry face when asked whether she or her partner, the queeny teenager, should go home. It was an easy question since he was the leader on their team, and their jacket sucked because he has bad taste, but somehow she couldn’t handle it. That’s a good sign for us. In the end, neither was voted off the island, even though the combined effect of their hairdos was criminal. It was the boy named Marion. Whatever.

Also, on your next job interview, try not to leave the celebrity hanging, like Joey Fat One did. Unless you’re trying to be hilarious. Then do that. 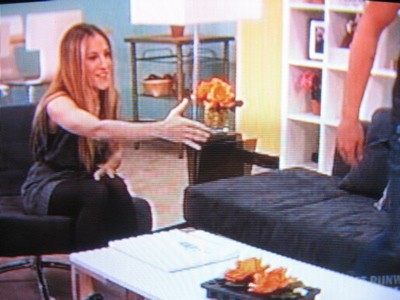